Elumelu To African Youth: Your Time For Leadership Is Now 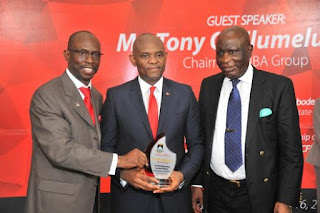 African business leader and philanthropist, Mr. Tony O. Elumelu stated that the time for leadership amongst Nigerian and African Youth is now. Elumelu, who addressed the students of the Lagos State University, faculty members and officials of the Lagos State government, whilst delivering the institution’s 1st Distinguished Lecture Series in Ojo, Lagos, spoke on the topics of leadership and entrepreneurship.


‎According to Elumelu, leadership is demonstrated at all levels of an institution and he gave short thrift to the idea that not only Presidents, Governors and CEOs are leaders. “A leader is simply someone who gets results” he said, challenging the students to embrace leadership, even at this early stage in their lives, “whether you are leading a team of people, or just yourself, your responsibility is to generate, secure or deliver results. I believe you can be a leader at any stage in your life and career, and in any career path you choose”.
Subverting some of the often-held notions about leadership, the UBA Group Chairman stated that leadership can be learned and it is important to keep learning and honing one’s leadership skills. “Just as I seek to democratise luck, with the work of the Tony Elumelu Foundation, so equally I believe every soldier carries a general’s baton in his pack. The key is self-belief – and an environment that enables” he said.
Unveiling what it means to him to assist budding entrepreneurs across Africa, Elumelu expressed his profound thoughts saying: “What value is wealth or money in an individual’s bank account if we cannot use it to positively impact society? The seeds we plant today will help us move the needle as it relates to the development of Nigeria and Africa. Embrace entrepreneurship, develop yourselves as leaders.  For your dreams to come true you need to be courageous, optimistic and bold. There are no shortcuts,” Elumelu advised the over 1500 students in the auditorium.
Tony Elumelu is the proponent of Africapitalism, and he had the opportunity to share this economic philosophy that encourages the private sector to invest for the long term, in sectors that advance the economic and social development of our societies. Africapitalism underpins Elumelu’s investments and his belief that entrepreneurship is capable of helping to grow and develop the African continent. It drives his decision to commit $100 million dollars to identify and grow 10,000 entrepreneurs on the continent over a 10-year period.
‎“Through the Tony Elumelu Foundation’s Entrepreneurship Programme which is in its second year, we will identify, train, mentor and seed 10,000 African businesses over the next 10 years, creating 1 million jobs and $10 billion in additional revenues across the continent.  “Your idea CAN transform Africa” he stated.
He called on the students to embrace entrepreneurship as a career. According to him, “If you pursue entrepreneurship, your options for advancement will not be limited to just finding a job.  You can create your own employment opportunities and create jobs for others. You can help to transform your communities, and the country,” he said.
The Governor of Lagos State, Mr. Akinwunmi Ambode who was represented at the event by Ms. Toyin Ademuiya, the Director of Creativity of the Lagos State government, noted that the choice of the guest speaker in Tony Elumelu and the topic he discussed, underscores the thinking of his own administration in strengthening the capacity of the University and supporting its mission to mould leaders out of students. As he thanked Elumelu for sharing his knowledge on entrepreneurship to the students, the Governor promised to continue supporting the university. ” Education is the bedrock of Nigeria’s future” he asserted.
The Chairman of the occasion and the Chancellor, of the University, Hon. Justice Adesola Oguntade (Rtd) in his remarks buttressed this saying: as he  said “Entrepreneurship is an essential topic of great essence given the current wave of youth unemployment. The choice of the guest speaker demonstrates the university’s passion and commitment to excellence. Tony Elumelu is indeed an icon of success”.
The Vice Chancellor, Professor Lanre Fagbohun, urged the students to follow the advice of the Guest Speaker, Tony Elumelu, who he described as a ‘serial investor and quintessential philanthropist who has continuously impacted on the continent through the creation of jobs and building young Africans in entrepreneurship’.
Posted by MAN ABOUT TOWN at 10:38 PM