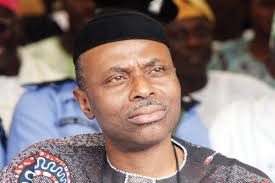 There was palpable tension in Ondo State yesterday as residents prepare to exercise their franchise to elect the next governor of the state. All public institutions and banks were closed while the state government declared public holiday for the students and civil servants to prepare for the election.


The Independent National Electoral Commission (INEC) had promised a level playing field for the 28 registered political parties and their candidates that will participate in today’s election. Serial protests by the Peoples Democratic Party (PDP) and Governor Olusegun Mimiko to postpone the election were rebuffed by INEC, as the electoral umpire expressed its readiness to conduct elections in all the 3,010 polling units in the state

And the refusal of the INEC to postpone the election yesterday, as demanded by the state Government, reportedly caused crisis in some parts of the state. Indeed, an APC chieftain in Owo, Mr Afolabi Olaposi, was reportedly shot dead by yet-to-be-identified gunmen while some properties were also allegedly destroyed.

The state Police PPRO, Mr Femi Joseph, said he did not have details of the incident now, but assured that the Deputy Inspector General of Police (DIG) in charge of the election would speak on the matter.

The state with over 3.6 million population, according to INEC Chairman, Prof. Mahmoud Yakubu, had 1,660,055 as registered voters but only 1,281,552 who have collected their Permanent Voters Card (PVC) would be allowed to cast their votes. “I wish to reiterate that INEC has no plans to postpone the election this weekend. We are fully prepared. We see no reason to activate the provision of Section 26 or Section 36 of the Electoral Act and there is no other ground in Law to postpone an election.

“I wish to assure you of INEC’s preparedness and neutrality. We are not unaware of the partisan insinuation of bias in the nomination of candidates by one of the political parties,” Yakubu said.

As at Thursday evening sensitive and non-sensitive materials had been deployed to all the 18 local councils by the electoral body, which assured that the 16,723 personnel to be used for the election were well trained for the job.

Highlighting the voting procedure, INEC stated that accreditation of eligible voters shall commence by 8:00 am in all the polling units, they would be given the ballot papers and allowed to proceed to vote without any delay.

Ondo State Resident Electoral Commissioner (REC), Mr Segun Agbaje, also noted that the only means of accreditation still remained the use of Smart Card Reader (SCR) for the 1,660,055 registered voters for the poll to elect the sixth executive governor of the state.
The Inspector General of Police (IGP), Ibrahim Idris, who spoke on Tuesday during the last stakeholders’ meeting, expressed the readiness of the force to maintain law and order during the election, assuring that the police has established synergies with other sister security agencies.

Idris disclosed that over 26,000 additional conventional police officers had been drafted to the state for the election. According to him, three helicopters, 29 gun boats, 300 Hilux van, 12 Armoured Personnel Carrier (APC) would be used for the poll, pointing out that it was a proactive measure to forestall security challenges peculiar to elections.

The Guardian gathered that a Deputy Inspector General of Police (DIG) has been deployed to the state and to be assisted by an Assistant Inspector General of Police (AIG) with three Commissioners for Police in each Senatorial district to coordinate the security operations and supervise the deployment of security personnel. The conventional police personnel are deployed as follows: five policemen per polling unit, 2,000 Mobile Police Force (PMF), 10 cells of Counter Terrorism Unit, the Special Protection Unit, the Anti-Bomb Squad (EOD), the Marine Police, conventional policemen, the Armament Units, personnel from FCIID and FIIB and the sniffer dogs section and Mounted Troops.

Other security deployment are: 20 police gunboats, three patrol surveillance helicopters, 12 additional Armoured Personnel Carriers (APC) and three hundred police patrol vehicles are being deployed throughout the state including the riverine areas and difficult terrains. They are to provide adequate security for the electorates, INEC staff, election materials, election observers and other individuals and bodies that have statutory roles in the conduct of the elections, at the polling booths, collation centres and INEC offices throughout the period of the election.

Concerning the election, Abuja-based group, the Youth Initiative for Advocacy, Growth and Advancement (YIAGA), has also deployed the use of science of statistics for the poll to complement INEC efforts in conducting a free and fair election. YIAGA said it would deploy 363 trained and non-partisan observers, who will utilise the “Watch The Vote” (WTV) advocacy to monitor the election across the three senatorial districts, using Parallel Votes Tabulation (PVT) methodology.

The WTV observers include 340 stationary and 23 roaming observers deployed to 300 sampling polling units to collate data, with four state coordinating committee members.
Troublesome terrains like Ese-Odo and Ilaje councils are given special attention in the election.

Similarly, People With Disabilities (PWDs) in the state were offered an all-inclusive opportunity to vote and serve as observers, first of its kind globally, in today’s election. The state PWDs under the auspices of Centre for Citizens with Disabilities (CCD), the Inclusive Friends Association (IFA) and the Joint National Association of Persons With Disabilities (JONAPWD) are not left out of the exercise.

According to them, the “Leave No One Behind: Disability Votes Count” campaign was largely supported by the National Democratic Institute (NDI) so that their votes can count and they are allowed to actively participate in governance. 27 teams of PWDs trained observers, which include a driver, an observer and a Personal Assistant (PA) are currently deployed to 200 polling units, which are the representative random sample of the 3,010 polling units in the state.

“Observers will rove on election day and answer questions at each of their assigned polling units, using a comprehensive checklist before sending their reports to a central database system via coded text messages,” they said.

On security, the INEC reiterated that its partnership with Inter-Party Consultative Committee on Election Security (ICCEs) and other stakeholders would protect lives and property.
The Police also announced restriction on movement, which came to force yesterday night as all the borders to the state would be closed and manned by men of the military operatives in the state. As it stands, none of the 28 political parties and their candidates are entitled to security protection including the major contenders in the poll: Rotimi Akeredolu of All Progressives Congress (APC); Eyitayo Jegede (PDP) and Chief Olusola Oke, Alliance for Democracy (AD). There are other prominent candidates in the election namely, Dr. Olu Agunloye of the Social Democratic Party (SDP) and the only active female candidate, Olamide Falana of the Democratic Peoples Party (DPP); none of them are entitled to such fringe privileges and they have been urged to caution their supporters against conducts that might cause violence during the election process.

However, some of the 47 accredited observers by INEC, 40 domestic and seven international, have predicted that there might be low turnout of voters compared with the last election that was conducted on October 2012, due to over 378,503 Permanent Voters Cards (PVC) that have not been collected by voters.
Guardian
Posted by MAN ABOUT TOWN at 10:44 PM