“You See Policemen Passing The Night In The Open And Being Unable To Feed.” Thousands Of Stranded Security Operatives In Ondo Deployed For Saturday’s Guber Election Cry Out

Thousands of police officers deployed to maintain peace and order during Saturday’s gubernatorial election in Ondo State, are stranded at several locations across the state 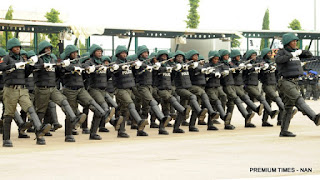 The Nigeria Police Force had earlier announced that no fewer than 26,000 officers would be deployed to forestall any outbreak of violence when residents go out to cast their ballots.

The officers were drafted from other states including Ogun, Oyo, Osun, Ekiti, which contributed 500 personnel each.

Officers from other states are still being expected, but those who have arrived since Sunday, said the police leadership made no provision for their welfare.

Some of the officers, who spoke with PREMIUM TIMES on the condition of anonymity Tuesday night, said the police knew they would be deployed for several months but failed to make adequate preparation.

“We are in serious trouble here,” an officer said. “You see policemen passing the night in the open and being unable to feed.”

The officers complained that apart from sleeping under makeshift tents, they have no access to proper sanitation and could barely keep their electronic devices on as there are no places to charge their batteries.

Some of them said the unbearable situation had compelled them to call their friends and family for soft loans.

“I had to call my old friend in Jos to send me loan me N10, 000 for me to even be able to survive,” the officer said. “But he was only able to transfer N8, 000 which I immediately withdrew from the ATM.”

The officer said he slept in a guesthouse that charged N1, 200 per night in the state.

“You know the kind of service they will offer in such a place,” he said. “How can they expect us to properly monitor elections when we’re not even properly fed or get good sleep?”

Police spokesman, Don Awunah, said he was aware of the plight of his colleagues and efforts were already underway to ensure that they receive their pay as soon as possible.

“Yes, we’re aware at the headquarters that they have not been paid,” Mr. Awunah said. “But we implore them to take it easy as the Inspector-General is working on their finances.”

“They will start receiving payment alert before the election begins in four days since we already have their personal accounts.”

The officers said they don’t know how much they will likely get as per diem for participating in the election.

“Nobody told us how much we would be paid or when,” an officer said.
They however assured they will do their best.

“This is a service to the motherland,” an assistant superintendent of police said. “We will do what we can and leave those responsible for this suffering we’re going through to posterity.”

Premiumtimes
Posted by MAN ABOUT TOWN at 10:06 PM