Shouts Of ‘’Fraud’’, ‘’Fraud’’ Rents The Air As Sherriff Olaniyan’s Surebet247 Is Doused In Allegations Of Refusal To Pay N1.8m Winning

With the recession plaguing Nigerian, many has resorted to alternative means of livelihood and one of such ways is playing of Lotto. while others are making their customers smiles. Surebet247 is allegedly defrauding its customers. information at our disposal has it that popular lotto company, Surebet247 has refused to reward a winner who claimed to have won N1.8M in a game played


Kunle Asulegan, winner of the game narrated how he placed a bet at the Blue Cottage, Oke-Ado, Ibadan on the 27th of September, 2016 and valid receipts of the games he placed was issued to him, but to his utmost surprise when he got there to check the results the second day, the computer showed ‘bet won’ and when he went to the centre to redeem his money the Surebet agents told him they have contacted their headquarters.

Asulegan expressed his disappointment when he got to the headquarters and he was told there was a mistake on the system.

A depressed Asulegan stated that all his efforts to redeem his money or talk to someone in position of authority in the company was blocked and he had to ask his lawyer to write the company which since then has refused to reply to the letter.

The lotto player explained to a reputable online news platform, Papermacheonline that this wasn’t the first time he was placing bets at Surebet, in his words ‘I usually win some and lost some, but now that I won big why are they finding it hard to give me my money?’.

Asulegan provided Papermacheonline the receipts of the games he played and allegedly won and also showed a copy of the letter his lawyer sent to Surebet’s head office in Lagos with a threat that he would toe all legal means to redeem his money. 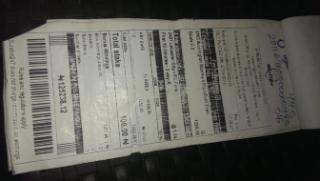 Societyreelnews made a call across to the owner of the lotto company, Sheriff Olaniran to confirm the incident.

“If he has won and he didn’t get his claim(Money) then he should go to the lottery board and make his complaint. What even gave him, the assurance that he won in the first place? Mr. Journalist, make your findings very well and write your report” His words.