A former Governor of Anambra  State, Mr. Peter Obi,  has said that  his successor, Chief Willie Obiano, has no legal right to bar him from visiting the state or airing his opinion about the state. 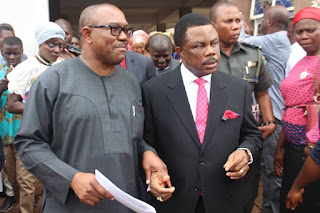 Obi, who spoke at Oraifite during the burial of Chief Emeka Offor’s father, Benneth Offor, described an alleged threat by Obiano to unleash an attack on him if he did not behave himself, as an empty one.

A media aide to Obiano,  Mr. Oliver Okpala, was reported to have threatened to deal with Obi and a former Secretary to the State Government,  Mr. Oseloka Obaze, over their comments on Obiano, which were considered to be unwarranted.

The governor’s aide said, “To this end, this is a notice that, henceforth, any further unwarranted attack on the governor will be met with a very tough response.

“Let it be noted that we have done our investigations, and we know that those sponsoring these unfounded attacks against the governor include those who have tasted power before, either as governor or secretary to the state government.

“We have their records, to the minutest of details, and we will not hesitate to unleash a higher degree of attack on their persons with verifiable proofs in our possession so that the world would know the dirty stuff they are made of.”

Obi, in his reaction, said it would be disastrous if Anambra degenerated into a dictatorial society under a democracy.

On what he would do should Obiano carry out his threat, Obi said the state should be advancing in civilisation by upholding the tenets of democracy and decency, rather than going back to the Hobbesian era.

He said, “Such an order will amount to asking me to go on exile. I have a house in Onitsha and live there.

“I served Anambra State for eight years. As the governor, I kept saying I would live in the state for the rest of my life to enable me share the joy and grief of the people. Why would somebody say I should not attend events in the state?

“Why would somebody request that I should stop saying what I did as the Governor of Anambra State, when people are still talking about the good deeds of the likes of Dr. Nnamdi Azikiwe and Chief M.I. Okpara?

“Most of the things said are not for self-adulation, but to use my experience to demonstrate to our people that we can do certain things we thought are impossible, an example was that I returned schools to the church and provided them with over 30,000 computers, generators and Internet connectivity.

“The fact is that under our government, we cleared arrears of pension of over N35bn, paid for all the certificates generated by contractors without borrowing a kobo, but instead left money, including dollars for the state.”

Meanwhile, Obi’s kinsmen, under the aegis of Agulu Leaders of Thought on Sunday appealed to  Obiano, to stop threatening  their son.

They reminded Obiano that it was Obi that single-handedly made him a governor.

A statement signed by the group’s secretary, Joachim Emegwamuo, and made available to journalists in Awka, read in part, “When the news of the threat to the life of our son, Mr. Peter Obi, started circulating, we ignored it as one of those rumours until Chief Joe-Martins Uzodike made it clear during a radio programme.

“We are aware that it was Obi who single-handedly made Obiano governor and we are also aware of several indignities Obi is suffering under the governor, ranging from lack of respect to continued and inexplicable witch-hunt.

“Obiano has deliberately allowed his aides to abuse Obi to the point of openly denying the over N75bn bequeathed to him.

“Obiano has abandoned the projects started by Obi upon which he was elected, thus portraying Obi as an unreliable leader among the Anambra people.

“If anything happens to Mr. Peter Obi or any of his aides, Obiano should be held responsible.”