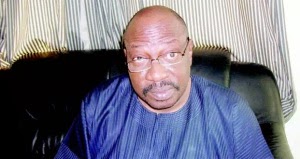 Fellow party man and a chieftain of the All Progressives Congress, Mr Adeniji Adele has lashed out at Governor of Ogun state Ibikunle Amosun.

He has branded the state helmsman as a liar.


He specifically accused him of peddling falsehood.

Here are the trending details.

'A leader of the All Progressives Congress, APC, in Lagos, Ademola Adeniji-Adele, has described the Ogun state Governor, Ibikunle Amosun, as a lair based on the governor’s claims on a farm in Ogun State.

Mr. Amosun, had while accusing his predecessor, Gbenga Daniel, of corruption, said the latter sold the state’s Apoje Farms Limited to Mr. Adeniji-Adele for peanuts.

“When they came into power, the farmlands were over 60. When we came in, it remained only five. They are rogues, thieves and bastards, God will punish them all,” Mr. Amosun said of Mr. Daniel and his backers.

In an open response to the governor via a letter dated September 19, Mr. Adeniji-Adele said his decision to respond was to clarify the governor’s ‘falsehood.’

“I had wished you had left me out of your battle with Governor Daniel but you had to drag me in to lend credence to the falsehood you were peddling,” the Lagos politician said.

Mr. Adeniji-Adele, a former commissioner in Lagos State, said he met with Mr. Amosun “on at least two occasions on the issue of Apoje Farms.

“On those occasions I explained to you and your aides that the transactions was a concession not a sale.

“The ‘paltry sum’ you mentioned was a signature bonus of N10 million.”

The Lagos politician, who is in the same party with Mr. Amosun, said his firm was “to bring in additional investment into the project. As at the time you illegally and unceremoniously kicked us out of the Farm we had invested well over N200 million in Nursery (15 hectares), a first phase of transplanting (1,500 hectares), and so many supporting infrastructure including irrigation”.

Mr. Adeniji-Adele said he has since gone to court to court to challenge the Ogun governor’s decision to cancel the transaction.

He accused Mr. Amosun of vendetta in running Ogun state, a situation which he said has split “our party down the middle and I hope you change your ways and bring the party together in the remaining months of your tenure”'
Posted by MAN ABOUT TOWN at 3:53 AM