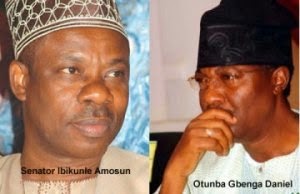 He admitted complicit in allegedly helping predecessor, Gbenga Daniel to hoodwink the citizens he ( Daniel) is from the state.

'Governor Ibikunle  Amosun of Ogun State on Wednesday said he was part of those that aided his predecessor, Otunba Gbenga Daniel, to claim indigeneship of Ogun State in 2003.
According to Amosun, Daniel was an indigene of Isoko in Delta State, but requested for assistance from him and some other unnamed persons to get a family house in Sagamu ahead of his 2003 governorship ambition in the state.

Amosun spoke on Wednesday at Odeda Local Government Area in continuation of his local government tour, which began on Tuesday.

The governor was reacting to allegations levelled against his administration by Daniel when the latter was at Odeda penultimate week.

'Daniel had accused Amosun of selling off all the farmlands in the area to other states, claiming Amosun’s administration had shortchanged the people of Odeda.

According to Amosun: “When they came into power, the farmlands were over 60.
“When we came in, it remained only five.

“Our forefathers will never forgive them and the generations coming will also curse them.

“We are not bastards from Isoko.
“They came to us then.

“We were the ones they ran to and we helped them to get where they are claiming today as their home.

“Although, it is not time for political campaign, yet I will not hesitate to respond to Daniel’s allegations, which he levelled against my administration here in the same Odeda Local Government.

“He is envious of our achievements and successes recorded within the past few years.

“We need to let them know that we are not thieves like them.

“They will not be able to stand and campaign for vote here in Odeda by the time I start exposing them.

“They are treasury looters.

“If not for the type of the country we are, they ought to have covered their heads in shame rather than boast around the town.”

In a swift reaction, Daniel described the statement credited to Amosun on his nativity status as diversionary.
Daniel, in a statement  by his media aide, Ayo Giwa, said: “It is now glaring that the clock is fast ticking towards electoral defeat hence his attempt to stand history on its head by reverting to the same scenario that played itself out some 12 years ago. The statement that Otunba Gbenga Daniel is not from Sagamu is an insult on the entire good people of the historical town of Sagamu as well as a taboo and effrontery on the traditional institutions in the land especially the thrones of the Akarigbo of Remoland as well as the Ewusi of Makun in Remo Kingdom.

“Precisely on Saturday 23 February, 2002, Otunba Gbenga Daniel was made the Aare Asoludero of Makun Sagamu with traditional rites performed by the late Ewusi, Oba Efuwape Ogunsowo, Inanuwa II. To all intents and purposes, Oba Ogunsowo declared that Otunba Daniel was a freeborn of Makun in Sagamu and of the Ojelobaye family origin. Prominent among those who were present on that occasion was the former Governor of Lagos State and the leader of the APC, Asiwaju Bola Ahmed Tinubu.

“Has he quickly forgotten that Otunba Daniel also holds the traditional title of the Arole of Remoland as well as many across the state? If he has respect and honour for traditional authorities and customs how dare he challenge such authorities? That Otunba Daniel sold all the state’s patrimony is in itself cheap blackmail. Is concession not different from outright sale? What has happened to the companies since he came to power some three and a half years ago and why did he not attempt to revive them if they are viable? The outburst from the incumbent is belated and immature.”' 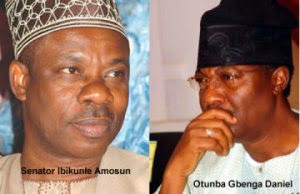