Fresh reports indicate the in jail power broker just sparked off a fresh unrest in his home town in Delta state.

He just imposed his daughter, Atake as candidate in the forth coming election. And certain interests are 'very against the move'.

More detailed report of this development and the growing fallout are reproduced.

'Former Delta state governor Chief James Ibori may be in the confines of London jail, he still weilds an enormous influence in the politics of his home state, Delta.

A scenario where the former governor still dictate the tunes in the politics of the state played out on Thursday, September 18, 2014 when PDP Delta party members took to the street to protest the imposition of Ibori's daughter, Atake to represent the Ethiope West Local Government Area, in the state's House of Assembly.

'Some members of the Peoples Democratic Party in that area are angry that Miss Atake Ibori, the most senior child of the ex-governor have been drafted into the state assembly race and that the leadership of the party in the state is determined to make sure all opposition to her emergence is quashed.

' A development which triggered a street protest. Their grouse is that going by the existing zoning formula in the area, it was the turn of the Oghareki people to produce the candidate of the PDP,

One of the protesters who spoke on behalf of others numbering over 400, including some House of Assembly aspirants in Ethiope West, alleged that the cronies and loyalists of the former governor had perfected plans to impose his daughter on the people. Whereas the current zoning arrangement stipulated that it is the turn of Oghareki to produce the candidate into the state house of assembly.

They took their protest to the premises of the local government Secretariat and the palace of the monarch of Oghara Kingdom, Noble Ashemitan, to register their grievances.

“It is the turn of Oghareki to produce the next candidate to represent the local government at the Delta State House of Assembly and Ibori should not take what belong to Oghareki to Ogharefe. Ogharefe has had theirs just like every other clan in the area." 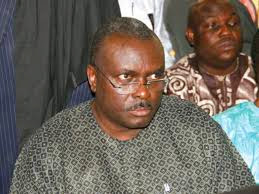