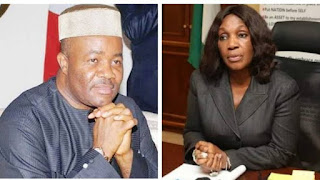 The suspended Interim Managing Director of the Niger Delta Development Commission, Joy Nunieh, has said the reason the
headquarters of the intervention agency remains unconnected to public power supply is allegedly because girlfriend of the Minister for the Niger Delta, Godswill Akpabio, supplies the diesel for powering the generating sets.

The former MD levelled the allegation on a morning programme on Arise TV, anchored by Dr. Reuben Abati.

“I looked at the diesel situation and said why don’t we give the young Niger Delta boys to supply?

“Why can’t we divide it into nine states for them to supply?

“NDDC in the past paid for us to get light directly.

It was connected straight to the NDDC headquarters building.

“That was disconnected at the gate of NDDC.

“Millions was paid to get that light source to NDDC.

“To connect it from the gate, it was sabotaged.

“Just for it to go inside the building.

“I mean, look at the fraud in this country

“When I came, I say all these monies on diesel, I am not here to spend money.

“How do I tell Mr. President that I came to do forensic audit and I come in here to commit the same offence?

“We looked at the system.

“How much it will cost to connect the light?

“To cut the long story short, I approved.

“We got the engineers to repair that thing.

“But because I’m not the one to pay….

“Do you know that they refused to pay the money for us to connect that light into the office so that we can keep buying that disease?”

Nunieh had last week accused Akpabio of sundry financial infraction after appearing before the Senate ad-hoc committee investigating the NDDC.

Akpabio and Nunieh had appeared before the committee investigating the alleged mismanagement of N40 billion by the IMC of the NDDC.

She told newsmen: “Nobody makes any payment in NDDC without Godswill Akpabio.

“When we first came to the NDDC, on the day of going for the inauguration, he told me in the car that: ‘Madam MD, If you don’t do what I say, the same pen which I use to sign your letter, it will be the same pen I will use to remove you.’

“He said the first thing I should do when I get to Port Harcourt is to change the dollars in the NDDC account.

“I was scared to do that.

“After that, he came to Port Harcourt.

“Two days after the inauguration, he said the first thing I should do is to make sure I change the dollars.

“I should remove Mr. Kaltugo from being Legal (Legal Department) and send him on compulsory retirement.

“He said I should remove all the other directors that refuse to take his instructions during the time of Mrs. Akwagaga, that is the predecessor before I came.

“So, he came also with a draft letter that I should write and put it on my letterhead implicating Senator Nwaoboshi of collecting contracts in NDDC.

“I told him that I will not, that I am a lawyer and that whoever alleges must prove the fact that Senator Nwaoboshi is giving us trouble.

“He will always refuse to sign but will tell you to go and commit the fraud.

“For instance, he told me to go and raise a memo and give an emergency contract for flood victims.

“He wanted me to take an oath.

“He has denied that but I want to say today, he told me up to three times until we had a reconciliation meeting at the Villa in the house of Mr. Seriki Abba, who is the SA to the President on Domestics.

“I refused to take the oath, so he said he was going to remove me.

“He started the campaign of calumny against me.

“I did not answer him because the fact will speak for itself.

“Then Mr. Linus, who was the Director, Finance, refused to sign because it did not follow due process.

“Then he also said that I should implicate the Chairman of the House Committee because the chairman had gone to Ondo State for a meeting to plan against him.

“Now, to end this matter about the procurement process, I refused to go with him to deceive Mr. President at the FEC (Federal Executive Council) meeting because the Procurement Act says if I contravene any session of the Act, it is five years imprisonment without an option of fine.

“Akpabio went to get the approval from FEC.

“The 2020 Budget has not even been discussed by the National Assembly till today.

“He lied to FEC, which is the greatest embarrassment for a country.

“I am challenging him to deny any of these allegations.”
Posted by MAN ABOUT TOWN at 7:38 AM