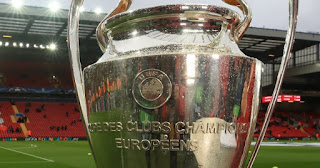 Bayern Munich will face Barcelona or Napoli in the quarter-finals of the Champions League, if they can defend their three goal lead against Chelsea in their last 16 second leg game.
The Champions League will resume in August after being halted in March due to the COVID-19 pandemic with a 'Final Eight' tournament being held in Lisbon after the remaining second-leg games from the last 16 ties are decided.

UEFA held the draw for the one-leg quarter-finals and semi-finals at their headquarters in Nyon on Friday (July 10).
Two quarter-finals were set by the draw with Germany's RB Leipzig facing Atletico Madrid and Italian club Atalanta up against Paris St Germain.
The rest of the draw depends on the outcome of the second-leg ties in the last 16.
Barca drew 1-1 at Napoli in the first leg and will host the Serie A side at the Nou Camp on Aug. 7 or 8.
Bayern Munich are strong favourites to make the last eight having beaten Chelsea 3-0 at Stamford Bridge in the first leg of their tie.
Real Madrid or Manchester City will face Olympique Lyonnais or Juventus.
City lead Real 2-1 heading into the return leg at the Etihad Stadium in Manchester while Lyon defend a one goal lead when they travel to face Juve in Turin.
The path to the semi-finals opens up the possibility of Pep Guardiola facing his old club Barcelona if both teams progress to the last four.

Reuters
Posted by MAN ABOUT TOWN at 5:43 AM