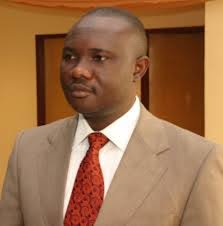 
The defendants, who were charged alongside their respective companies, Don Parker Properties Limited and Building Associates Limited, were arraigned on November 10, 2018 on  45-count-charges, bordering on conspiracy and money laundering to the tune of N3, 645, 000,000 (Three Billion , Six Hundred and Forty-Five Million Naira), to which they all pleaded not guilty.

One of the counts read: "That you, Engr. Tuoyo Omatsuli, between August 2014 and September 2015, at Lagos within the jurisdiction of this honourable court, did procure Francis Momoh and Building Associates Limited to use the total sum of N3,645,000,000 (Three Billion Six-Hundred and Forty-five Million Naira) paid by Starline Consultancy Services into the Diamond Bank Plc Account No. 0023785116, operated by Building Associate Ltd when you reasonably ought to have known that the said sum formed part of the proceeds of your unlawful activity to wit: corruption and gratification and you thereby committed an offence contrary to Section 18 of the Money Laundering Act 2011 as amended by Act No 1 of 2012 and punishable under Section 15 (3) of the same Act."

At the resumed sitting on Tuesday, prosecution counsel, Ekene Iheanacho, told the court that it was closing its case against the defendants after the testimony of the 16th prosecution witness, Segun Temitope, a staff of the Special Control Unit Against Money Laundering, SCUML.

It could be recalled that on Monday, July 6, 2020, Babajide Tinubu, managing director, Tenax Marine Limited, who in 2014, sold a landed property, located in highbrow Lekki Phase 1, Lagos to Don Parker Properties Ltd (second defendant, belonging to Omatsuli) at the cost of N3.645billion with the payment made by Building Associates Limited (fourth defendant, belonging to Momoh), testified as prosecution witness 14 (PW14) and was cross-examined by Norris Quakers, SAN, counsel for the second, third and fourth defendants.

Also Dr. Henry Ogiri, who worked as executive director, Finance and Administration, NDDC, between December 2013 and December 2015, testified as prosecution witness, PW15 and was cross-examined by Omatsuli’s counsel, Prof. Amuda A. Kamke, SAN.

Justice Saidu adjourned the matter till October 12 and 13, 2020 for the defendants to open their defence.