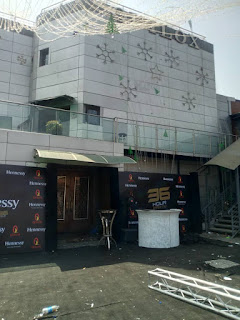 The Lagos State Government has locked up Quilox pool and bar, Ajah and three other facilities for violating COVID-19 guidelines and contravening different sections of the State Environmental Law.


The agency’s General Manager, Dr. Dolapo Fasawe, stated that the agency had acted on a tip-off from a whistle-blower that discovered the infractions.

“The agency acted on a tip from a whistle-blower, alleging traffic congestion, flagrant disobedience of the environmental laws (public smoking and noise pollution) as well as non-compliance of the COVID -19 safety protocols. And upon arrival, the team noticed several infractions and identified same to the management, which led to clearing out the fun seekers and shutting down the facility pending full investigations.

“Our aim in LASEPA is to identify environmental violations across the various facilities visited, but could not afford to ignore the level of non-compliance to COVID-19 protocols in all the sealed facilities”, she added.

” Apart from the environmental contravention observed in some of the facilities visited, we saw clearly that there were so many other pressing issues that needed to be handled and as such we are happy that all other relevant MDAs such as the Lagos State Safety Commission,(LSSC), the Rapid Response Square, (RRS) Lagos State Traffic Management Authority ( LASTMA) and the Lagos State Task Force are in sync with the Government to flatten the curve as soon as possible” she said.

The other entertainment facilities put under lock by the government were Page One in Ajah, Farms City, and Bien Mange in Lekki axis of the state.
Posted by MAN ABOUT TOWN at 1:31 PM