Untold Story Of The Extraordinary Friendship Between Magu & Saadina Dantata 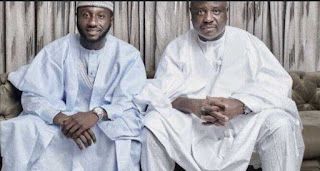 Alhaji Saadina Dantata is a dandy soul. Beneath his well-cut Babarigas and unassuming demeanour lies a posh and groovy character. Despite his inclinations for
lustre, he understands that vanity is the ugliest armour a Midas could wear, hence, he aspires to humility even under the full weight of privilege and his epic stature.

Life is good for Saadina, the billionaire businessman behind Danba Group. He literally lives in a bubble; unfettered access to tons of money, all things bright, bubbly and beautiful. Many of his peers and protégés would give a limb to swap places with him for just one day. Though in and around Abuja where he has sprawling, eye-popping properties, he is renowned and respected for his deep pocket and lifestyle. And he is as powerful and prosperous as they come. But Saadina’s name does not strike a chord easily elsewhere because, despite his privileged status, he maintains a quiet life.

In fact, only a few people know that he is unarguably the best friend of beleaguered former acting chairman of the Economic and Financial Crimes Commission, EFCC. You would never see them together anywhere because they jealously guard their chumminess but those in the know say a day hardly goes without them spending time on the phone or catching up whenever time permits.

From the popular Dantata family of Kano State, Saadina effortlessly exudes dignity and class; and lives like a man of true character and quiet nobility but his son, Saadina Dantata Jnr, is cut of an altogether different clothe. Young and urbane and fun-loving, the younger Dantata makes no bones about flaunting the family wealth on social media especially when they are riding inside the family private jet. Saadina has one of the most expensive private jets in this side of the world.

On his son’s Instagram page, for instance, the family’s life of luxury unfurls like a movie. While the businessman keeps a very low profile in the social arena, he lives like royalty in his private palace. He, apparently, detests mindless ostentation but he is never apologetic for being successful and rich. You could be forgiven for likening his life to the charmed existence of Saudi’s Crown Prince or the Prince of Dubai. His mansion dazzles like pure emerald, particularly with its fleet of expensive cars, which would definitely make Skymit Motors and Mandilas among others, go green with envy.
Posted by MAN ABOUT TOWN at 11:55 AM