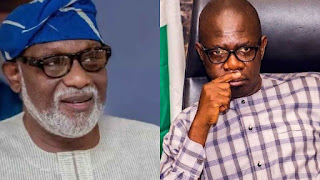 The impeachment process of the Ondo State Deputy Governor, Mr Agboola Ajayi,  by the state House of Assembly suffered a set back as the Chief Judge of Ondo State, Justice
Olanrewaju Akeredolu, rejected a letter written to her by the Assembly to constitute a panel that would investigate the allegations leveled against the deputy governor.

The House on Tuesday, during its plenary, served the deputy governor the notice of impeachment following an allegation of gross misconduct.

Fourteen members of the Assembly signed the notice while nine opposed the impeachment process.

However, Ajayi said he was yet to be served the notice but the Assembly insisted that he had been served.

In a letter personally signed by her, a copy of which has gone viral,  the CJ said the House had not completed the constitutional process that would make her set up an investigative panel.

The letter was titled, Re: Request to set up 7-man panel pursuant to section 188(5) of 1999 Constitution of the Federal Republic of Nigeria (as amended).

he added that the matter was already in the court of law.

Part of the letter read, ” The Honourable members of the House of Assembly have not completed the constitutional process that would lead your (Speaker) very good self to invite my humble self to set up a panel of 7 to investigate the allegation of gross misconduct as stipulated in the constitution.

“Furthermore, I wish to bring to your notice a copy of letter which I received earlier today (Thursday) from Kayode Olagoke SAN, which tells me clearly that the matter of impeachment of Hon. Alfred Agboola Ajayi, Deputy Governor of Ondo State is sub judice.

Punch
Posted by MAN ABOUT TOWN at 1:48 AM