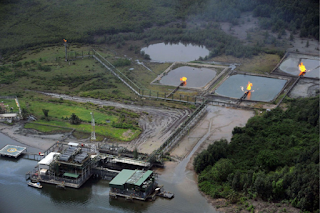 Junior oil firms flocked in their hundreds to bid for one of the 57 marginal fields put up for sale by
the Abuja authorities to avoid a financial debacle as the Covid-19 crisis continues.

Nearly 600 companies had submitted a bid with the Department of Petroleum Resources (DPR) by the 21 June deadline for one of the 57 marginal fields included in the bidding round launched at the start of the month. The assets include 22 fields that had belonged to Shell subsidiary SPDC, 12 previously owned by Chevron, two by ENI’s local arm NAOC, 11 by Mobil and five by Total (Africa Intelligence, 14/05/20). The DPR should whittle the selection down to around 300 to 400 firms in July.

A large portion of the bidders were created for the occasion by joining forces with more established firms. The teams of the new DPR boss, Sarki Auwalu, will be looking for candidates with a board that represents Nigeria’s six geopolitical regions. Their aim is cut the list down to not more than five companies per field. The ones most likely to win a field are those with the best political backing.
Gaining political support

A number of prominent Nigerian political figures are, as our sources understand, being courted by contenders for support. Many have sought the backing of the Speaker of the House, Femi Gbaja Biamila, who hails from Lagos State, the President of the Senate, Ahmed Ibrahim Lawan, as well as the chairmen of the two houses’ upstream committees, Bassey Akpan (Akwa Ibom State) and Musa Sarkin Adar (Sokoto State). All four have offered their support to certain contenders and put in a word for them with the Minister of State for Petroleum Resources, Timipre Sylva. Several Niger Delta chiefs, the likes of Edwin Clark or the former minister of state for energy, Edmond Daukoro, have championed some of the groups in the bidding over the past few days.

While President Muhammadu Buhari, who is also in charge of the petroleum portfolio, will not directly offer his support to any one contender, several members of his close entourage have been solicited by oil firms hoping for a little help in getting their tender to the top of the pile. The two most sought-after and most powerful of these are Mohammed Sarki Abba and Yusuf Tunde Sabiu, both senior special assistants to the president. Both men have the ability to position certain companies on the best fields.

Some contenders already emerging from the crowd?

Levene Energy, one of favourite firms of the Buhari era, works directly with Sylva and the Minister for Aviation Hadi Sirika, who like the president hails from Katsina State. Kano State entrepreneur Sayuu Dantata, the head of trading house MRS Oil and half-brother to the richest man in Africa Aliko Dangote, is also one of Levene’s supporters, having regularly secured Nigerian National Petroleum Corp cargos since

thecapital.ng
Posted by MAN ABOUT TOWN at 5:21 AM