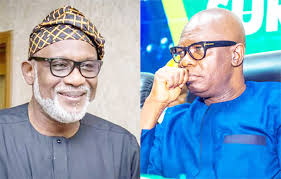 The process to Impeach the Deputy Governor of Ondo State, Hon. Agboola Ajayi has
commenced at the Ondo State House of Assembly on Tuesday.

Members of the Assembly are currently deliberating on the allegation of gross misconduct against
Ajayi, who resigned from the All Progressives Congress and defected to the People’s Democratic Party.

Armed security operatives are currently present at the premises of the Assembly to maintain law and order.

Ajayi had on Monday sued the House of Assembly over alleged plans to remove him from office.
He said the decision was to halt plans by the assembly to begin his impeachment process for leaving the ruling APC to PDP.