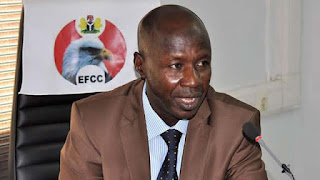 It was gathered that Magu who is facing various allegations of corruption especially in relation to assets recovered by the EFCC was suspended on Tuesday afternoon.

Magu had on Monday, July 6, 2020, appeared before the presidential panel that reviews the agency’s activities.

His summon is believed to have been the result of a recent petition from the Minister of Justice and Attorney-General of the Federation, Abubakar Malami, who accused him of 22 weighty corruption allegations.