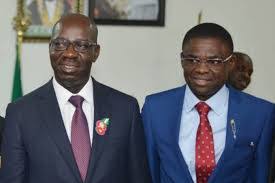 The All Progressives Congress (APC) is seeking the disqualification of the governor of Edo state, Mr. Godwin Obaseki and his deputy, Mr. Philip Shaibu from the upcoming gubernatorial poll over falsified academic qualifications and tax fraud. The details are contained in court documents filed at the Federal High Court in Benin by West-Idahosa & Co.


The suit, filed by the All Progressives Congress and Mr. Edobor Williams, a member of the party, highlights a number of inconsistencies in academic credentials provided to the Independent National Electoral Commission (INEC) by the duo of Mr. Godwin Obaseki and Mr. Philip Shaibu, both candidates of the People’s Democratic Party (PDP) in the Edo governorship election scheduled to hold in September.

Mr. Philip Shaibu, who is on a joint ticket with Mr. Obaseki, seems to be in even more dire straits. In addition to being accused of providing falsified certificates and obtaining educational qualifications through fraudulent means, there is also an outstanding allegation of tax fraud dating back to over a decade.
Academic qualifications listed by Mr. Shaibu include a Bachelor of Science degree from the University of Jos, a notification of higher degree examination result from the University of Benin, and a senior secondary school testimonial from Sardauna Memorial College, Kaduna.

The APC, however, argues that Mr. Shaibu fraudulently obtained his Bachelors and Masters degrees from the University of Jos and the University of Benin respectively, as he did not attain the minimum requirement for gaining admission into the university having recorded credit and above in only two subjects in two separate results issued by the West African Examinations Council (WAEC) in 1989 and 1997 respectively.

The party also pointed out discrepancies in both certificates. The WAEC result from 1989 is for a “Shuaibu Philip”, contrary to his name on official and public records, which is “Philip Shaibu”. To further validate doubts about his WAEC result, the name on the second certificate is “Shiabu Philip”.
Mr. Shaibu, while applying to the school of post-graduate studies at the University of Benin, also listed grades obtained from a WAEC exam which he supposedly sat for in 1993. A record of this does not exist.
Posted by MAN ABOUT TOWN at 11:12 AM