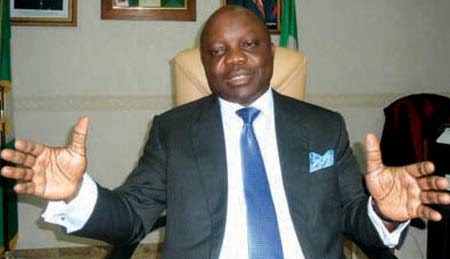 The governor, who described the allegation as bizarre, wondered what he would do with such money barely two months to the terminal date of his administration.

In a statement routed through his Commissioner for Information, Chike Ogeah, in Asaba on Sunday, Governor Uduaghan faulted his adversaries, wondering why he would divert N40 billion from the said bonds.

He said: “The most bizzare of the reports that over N40 billion will be diverted to private pockets as farewell gifts for loyal aides while the balance will
be used to bribe officials of the Securities and Exchange Commission and banks.”

While the governor denied any iota of truth in the allegation, he said there was even no such plan and no move has been initiated to that effect.

Uduaghan said in the morbid haste to portray his administration in poor light, his detractors displayed total ignorance of the workings of the capital market or genuinely lacked adequate knowledge to distinguish between an executed bond and a tranche that was not taken.

The statement added: “On December 8, 2011, the SEC listed the Delta State N50 billion bond on the floor of the Nigerian Stock Exchange. The bond had earlier been issued on September 29, 2011 after due diligence and strict regulatory requirements of the capital market and SEC had been complied with. Rated A+ by Agusto & Co and Global Rating Company Limited, the issue was the first tranche of N50 Billion out of its N 100 Billion Bond Issuance Programme and was fully subscribed.
“The bond proceeds were irrevocably tied to the execution of projects critical to the actualisation of

Dr. Uduaghan’s pledge to provide world class infrastructure in health, education and transport to the people of Delta State. The projects include the building of over 50 model schools across the state, the Maternal and Child Care Centre, Eku, 100-bed Mother and Child Healthcare Complex at the Warri Central Hospital as well as some roads and bridges.

“In December 2012, the then Director General of SEC, Dr. Arunma Oteh, had toured some of the projects executed with proceeds from the bond to ascertain the extent of its utilization. This is in the public domain. Dr. Oteh had expressed total satisfaction with the execution of the projects and commended Dr. Uduaghan for proper utilization of the bond. On visiting the schools, she further averred that the schools are so unique, so impressive and outstanding and they have the potential to attract the children of the rich. I think it is likely to make the rich to withdraw their children from private schools to these model schools.”

While Uduaghan said the state had the option of drawing the second tranche of N50 billion from the N100 billion bonds programme, he, however, said this option has not been exercised and there is no plan whatsoever to activate it as the administration winds down.
He said: “We understand that under the present political environment, mischief makers and hirelings will be on over drive. Even then, decency demands that there should be an effort to get the facts straight. If Fejiro Oliver had made a little effort to search the web or reach the Ministry of Information, he would have been saved from the embarrassment of looking so hollow in his story.”
The statement said governance in Delta State is committed to transparency, maintaining that every transaction entered into by Dr. Uduaghan is conducted with strict adherence to the rule of law and due process.

More importantly, the details of every project are in the public domain, the statement said.

It added: “Even as his administration exits on May 29, 2015, Dr. Uduaghan remains committed to keeping a hands-on approach to delivering on his promise to the people. Payment to contractors are made as at when due subject to the availability of funds as a result of the almost 40 percent decline in federal allocations to states and he will not enter into any project or transaction that will undermine the ability of the incoming government to function. The governor’s priority now is to superintend over the completion of all initiated projects as well as the ones he inherited.”
Posted by MAN ABOUT TOWN at 12:20 AM