One of the candidates jostling to become a Federal lawmaker in the upcoming general election, Oluwametomi Adisa has been arrested for a multi million naira fraud. 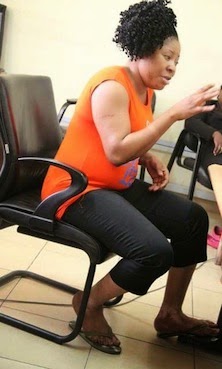 A House of Representatives candidate of the Social Democratic Party, SDP, Miss Oluwametomi Adetokunbo Adisa, has been arrested by the Economic and Financial Crimes Commission, EFCC, for allegedly obtaining the sum of N142, 029,000 (One Hundred and Forty- Two Million, Twenty- Nine Thousand Naira only) from one businessman, Alhaji Isa Bello, by false pretence.

The 37-year old politician allegedly obtained building materials worth N142, 029,000 from Bello, in the guise of servicing a supply contract she had with a construction company.

Bello said that all efforts to make Adisa pay up the balance proved abortive.

Adisa will be charged to court at a later date.
Posted by MAN ABOUT TOWN at 3:09 AM