Presidential campaigner, Femi Fani Kayode is in a fresh romance. 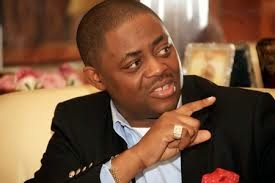 And the object of his affection is identified as Miss United Nations, Precious Chikwendu.

Even the most formidable nobility in the world may turn jelly when caught in the pleasure trove of love. It is hardly surprising then that Current Miss United Nations, Precious Chikwendu, who recently secured the franchise to host Miss United Nations (Nigeria) Beauty Pageant in Abuja, has the heart and ears of Chief Femi Fani-Kayode, the Director of Media and Publicity of the Peoples Democratic Party Presidential Campaign.Curiously, however, many a man in love with a dimple makes the mistake of marrying the whole girl, said Stephen Leacock, late British-born Canadian writer and economist, in his famous work, Literary Lapses.Leacock’s words unarguably strike a tender point in the life of Fani-Kayode.

The former minister has rediscovered his joy in his relationship with Precious.  He does not only deploy great tact and ingenuity to please his beautiful lady, he showers immeasurable love on her at every opportunity. Femi, who used to be in love with Chioma Anazoh and Vivian Agbaza, enjoys the admiration of not a few society ladies who continually dote on him. His affair with Precious started a few months ago when the duo met in Abuja. It’s simply poetic to see the couple holding hands or sharing smiles in public, oblivious of the world around them. No wonder Precious was full of praises some days ago announcing to the world what Lord Has done in her life.

And this happens to be good news to her friends and family members as they join her in praying that what God has done in her life should be permanent.

However, Femi and Vivian Agbaza probably broke up with a lingering, lamenting kiss, sucking their two souls in only to disembowel their hearts and purge it of the passion and love that thrust them together as one, back when their two hearts thumped as one. Hardly anyone knows the actual reason for Vivian’s separation from Fani-Kayode, but everybody remembers the story of their love. It is no secret that the duo were involved in a sizzling romance that seemingly defied common sense and wanton speculations of the high society rumour mill; their well-celebrated romance has however, run its full course as Femi has now pitched his tent with Precious in what has been randomly identified as rebound affair.


thecapital
Posted by MAN ABOUT TOWN at 11:57 AM