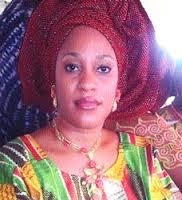 Benjamin Saliu Ikani, wants Roli, the wife of PDP Chieftain Olabode George and another NDLEA topshot, Ahmadu Giade committed to a year in prison each.

And he has instituted court process to achieve his aim.

Roli, who is the wife of a chieftain of the Peoples Democratic Party (PDP), also doubles as the NDLEA secretary.

Both Giade and Roli were alleged to have disobeyed a court order which restrained them from sacking Prince Benjamin Saliu Ikani, an Assistant State Commander with the NDLEA.

In an order made by Justice Okechukwu Okeke (now retired) of the Federal High Court in Lagos on November 9, 2010, the NDLEA and Giade were specifically restrained from “interfering with or otherwise obstructing the applicant (Ikani) in the performance of his duties as Assistant Commander in the employment of the agency.

The order was to be in force until the final hearing and determination of the suit file by Ikani.
However the suit was later transferred to the National Industrial Court as the subject matter bordered on labour dispute.

In an affidavit sworn to by Ikani in support of the committal motion, he averred that despite the fact that Giade and Roli were aware of the existence of the interim order, they nonetheless suspended him on February 16, 2015 from duty without pay.

He stated that: “the committal motion was filed basically to protect and restore the dignity of the judicial process and to “punish these characters (Giade and Roli) sufficiently to deter others from pursuing similar paths of illegality.”

Ikani averred further that his travails with the NDLEA management started when he was appointed by the Attorney General of the Federation as the secretary of the seven-man presidential committee for the reform of the agency.

However, Ikani said the NDLEA leadership, after considering the report, accused him of not protecting the agency.

According to him, since then, they have been witch-hunting and persecuting him for no reason. He was later retired illegally on an untenable ground that he was not entitled to return to service after serving as Attorney General of Kogi State, a development that necessitated the suit.

After the suit was instituted against the NDLEA and its chairman, the court made an interim order and the applicant was reinstated, but was later suspended on February 16, 2015.
Apart from seeking an order committing Giade and Roli to one year imprisonment each, the applicant is also seeking an order summoning the duo to appear in court for the purpose of the enforcement of the order upon them.

He also wants the court to declare that the ground for his suspension was unconstitutional, unreasonable, made without or in excess of jurisdiction, irregular, unlawful and void.

He further wants an order nullifying the said suspension and an order restraining NDLEA, Giade and Roli whether by themselves, their servants, agents and privies or otherwise whosoever from implementing or enforcing the contemptuous act contained in the letter of February 16, 2015.