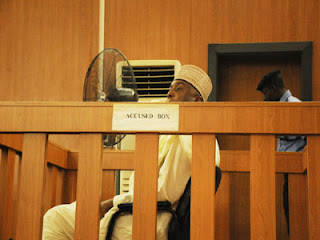 Operatives of the Economic and Financial Crimes Commission (EFCC), last week, stormed Ilorin, the Kwara State capital, in search of fresh evidence in pursuant of the ongoing trial of the Senate President, Dr Bukola Saraki, sources said at the weekend.

Investigations by the Nigerian Tribune confirmed at the weekend that operatives of the commission arrived at Ilorin, last week Monday and combed the records of the state’s Ministry of Finance and the Office of the Accountant-General of the state.

Sources confirmed that the operatives worked in Kwara till last Wednesday, when they returned to Abuja, but also requested the Commissioner for Finance, Alhaji Demola Nurudeen Banu, as well as the Accountant-General,  Alhaji Suleiman Ishola to report at the commission’s headquarters on Thursday.
It was gathered that while the duo reported in Abuja, they were not detained, but made to answer some questions on Thursday and allowed to return to Kwara on Friday.

It was gathered that the operatives were largely concerned about the accounts of the state from 2003 till 2011, while the officials were requested to provide certain documents.

A source in the know of the situation said: “With the way the trial at the Code of Conduct is going, it appears that the commission has the need for further evidence from the Kwara angle. The trail has seen the need to ensure a water tight case especially on records of alleged payments to the former governor, Senator Saraki before he became the Senate President.

“It will be recalled that the EFCC had alleged that Saraki was still being paid his salary as governor when he had become a senator. The operatives combed the Ministry of Finance and the Accountant General’s Office from Monday to Wednesday, last week and they later left for Abuja.

“I am also aware that the Finance Commissioner and the Accountant-General were summoned to Abuja, last Thursday and the duo appeared. The only thing is that they were not detained. They left for Kwara on Friday.”

Though the spokesman of the EFCC, Wilson Uwujaren and the Senior Special Assistant to the governor of Kwara State on Media and Communication, Dr Muyideen Akorede, denied knowledge of the raids, sources close to the issue insisted that the Kwara officials were at the EFCC office in Abuja, on Thursday.

It was also confirmed that the operatives were in Kwara and combed the Ministry of Finance, as well as the office of the Accountant General between Monday and Wednesday last week.

While the spokesman of EFCC told the newspaper he was unaware of the raid, the SSA to the Governor on Media and Communication, Akorede, also said he was unaware.