The head honcho in the Federal Inland Revenue Service, FIRS, Babatunde Fowler, has been accused of being involved in an employment scandal at the tax agency. 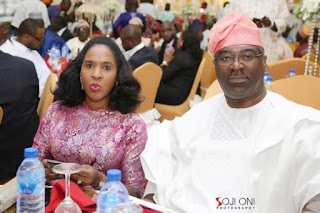 According to SaharaReporters, Fowler, a protégé of Bola Tinubu, the National Leader of All Progressives Congress, APC, oversaw the employment of 3,489 new staff in violation of the necessary procedures.


It was reported that the recruitment exercise was not preceded by a public advertisement of vacancies to be filled and approval by the Federal Character Commission as the service rules stipulate.
The newly employed persons, SaharaReporters said, were inducted in Abuja last Wednesday.
Fowler, who was appointed last August by President Muhammadu Buhari, had previously been accused of indifference to service rules on employment by secretly hiring 250 new staff. However, his accusers, could not make the charge stick, as he claimed those hired are not full-time employees but consultants.
The latest findings, however, are accompanied by substantial evidence including the list of new recruits, complete with their states of origin, dates of birth, phone numbers, email addresses, academic qualifications, recommended ranks and proposed duty stations.
The list, exclusively obtained by SaharaReporters, showed that six of the new recruits are of the position of deputy director, while 10 are assistant directors. Thirty-four others are of the rank of deputy manager, while the rest are made up of senior managers, managers, assistant managers and officers. All the 36 states and the Federal Capital Territory are represented on the list. Akwa Ibom State, for example, got six slots, while Gombe has 13. Ondo State is a beneficiary of 13 slots. Lagos State, where Fowler hails from, was awarded 14 slots.
Katsina got 18, Kano 15 and Borno 23. Rivers State was given 14 slots. But in certain cases, the list does not show the states of origin and education qualifications of some of the new staff, making it difficult to know they states of origin and qualifications.
Wahab Gbadamosi, FIRS acting Director of Information, told a news website last week that relevant agencies of government approved the recruitment.
“Your enquiry on the targeted recruitment at the Federal Inland Revenue Service, FIRS refers. We wish to respond as follows: Please note that requisite agencies of government approved the targeted recruitment by the FIRS. Due Process -in recruiting into a Federal Government agency- was followed; The FIRS is a conscientious, law-abiding institution which adheres to statutory rules and procedures; The FIRS is focused on its duty to collect revenue to fund the national budget and pleads that it should be allowed to concentrate on its 2016 target of N4. 9 trillion,” he was quoted to have responded via email.
Noticeably absent from the mail, however, are whether the vacancies were advertised or not and the names of the relevant agencies that green-lighted the recruitment.
As with the CBN recruitment scandal, the list of employed persons reeks of nepotism.


..sahareporters
Posted by MAN ABOUT TOWN at 8:02 AM