It is indeed true that Emmanuel Kachikwu, Honourable Minister of State, Petroleum Resources is a womaniser. The substantive Group Managing Director (GMD) of the Nigerian National Petroleum Corporation (NNPC), is undoubtedly enslaved to the whims of his passion. 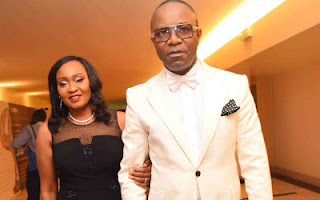 Anywhere it directs, he humbly treads. This has cost him his marriage to his first wife, Mariam who works in Seplat. Kachikwu abandoned the woman and her children ever since he found love in a new bride,
Elizabeth. The Minister of State for Petroleum has made it very clear that he does not wish to have anything to do with Mariam and the children they raised together, again.

Since her husband betrayed her love and deserted their home, Mariam has become a poor shadow of the vibrant woman she used to be. The staff of Seplat, an energy firm is currently heartbroken and devastated by her husband's betrayal. Since Kachikwu abandoned her and the kids, Mariam has been responsible for the upkeep of the children and their home, according to her closest friends.

Mariam's devastation stems from the fact that she suffered through hard times with Kachikwu. When things got really rough in Kachikwu's pursuit of wealth and acclaim, Mariam reportedly stood by him and made very expensive sacrifices to ensure that her husband attained his life's ambitions. Hence it is no doubt treacherous of Kachikwu to desert such a woman after she made invaluable sacrifices to guarantee his attainment of his dreams.
.

Kachikwu was appointed as the NNPC's GMD to wide public acclaim in August, 2015 under the presidency of Muhammadu Buhari. In November, 2015, he was named the Minister of State, Petroleum Resources by the President. He is the immediate past President of the Organisation of Petroleum Exporting Countries (OPEC) Conference with a tenure that expired in January 2016. Kachikwu is a distinction graduate of Law from the University of Nigeria, Nsukka and Nigerian Law School. He bagged a first class degree in Law and was the best graduate and multiple awards winner from both institutions.

He thereafter obtained a Doctorate Degree in Law from Harvard University, with distinctions. He came highly recommended for his current public offices

...theinfluence
Posted by MAN ABOUT TOWN at 7:10 AM