Several workers who worked in the security department of Total E&P Nigeria Limited on Monday protested the non-payment of their severance packages by the company. 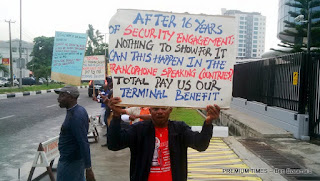 The protesters, who bore placards and chanted solidarity songs outside the oil multinational’s office in Lagos, accused the company owing them severance benefits after 17 years of service.

The former workers said despite repeated demands, the company refused to fulfill its obligations to them.
Some of their placards read: “Casualisation is an employment fraud. Total, pay us our severance package,”

“Total, we do not deserve this unfair treatment” “Total, pay us our bonuses, allowances,” “President Buhari, please come to our aid.”

Some of the former staff said they could barely feed their families, having been thrown out of employment without benefits.

Some of their colleagues, they said, had lost their lives due to inability to feed well or afford medical care.

Kayode Awonuga, a former security worker, said he served Total E&P Nigeria for over 15 years but was not “paid a dime” as severance package after his contract was terminated.

“When we came to ask for our benefits, they chased us away with policemen,” said Mr. Awonuga.

“We’re asking President Muhammadu Buhari to come to our aid. The government should not allow Nigerians to be treated like slaves.”

Another protester, Blessing Okeje, said her late husband worked as a security staff at the company for 14 years.

She said she had struggled to take care of her family after efforts to collect her late husband’s severance package failed.

“I have been demanding for my late husband’s benefits so that I can use it to pay school fees and feed my children,” Mrs. Okeje said amidst sobs.

“The company didn’t even answer us.”

The former workers’ lawyer, Ali Adah, said over 105 Nigerians were disengaged by the oil giant without compensation.

“Some of them worked for Total E&P Nigeria for over 15 years,” he said.

“They have families and siblings to cater for. The years put into the services of Total Nigeria is not recoverable.

“Where would they start from without any stipends extended to them as terminal benefit/entitlement in return for the services rendered over the years?

“How would they trace their entitlement frittered in the many companies Total Nigeria claims were our clients’ employers.”

Total E&P Nigeria, however, denied the allegations, saying the former security staff were not engaged directly by the company, but through contractors who were responsible for them.

“These contracts were terminated according to the terms of the respective contracts. The said personnel in question were at all times employees of the contractors and not at any time employees of TEPNG.

“TEPNG hereby reiterates that it carries out its activities in a diligent, efficient and professional manner in full compliance with, and respect for all national laws and regulations.”