“Pls, Allow Me To Go. I Will Not Come Back Again’’ Frightened Chieftain, Adewale Oladipo Pleaded With Hundreds Of Angry Youths Threatening To Mob Him At Party Secretariat Over Leadership Crisis While His Associate Adewole Adeyanji Took Off!

The leadership crisis rocking the Peoples Democratic Party (PDP) escalated on Wednesday as angry party youths stormed the secretariat in their hundreds. 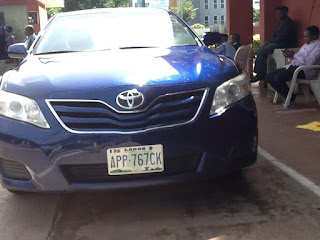 Armed with placards and leafy tree branches, the youths who arrived at the secretariat as early as 7:00am, spared no words in castigating the ousted party chairman, Alhaji Ali Modu Sheriff.
Incidentally, Sheriff, who came and stayed briefly in his office on Tuesday, did not show up at the secretariat on Wednesday.

But his co-travelers, Prof. Adewale Oladipo and Alhaji Adewole Adeyanju, sacked National Secretary and National Auditor respectively, were harassed by the irate mob.


Oladipo and Adeyanju have rejected their sack, insisting that their tenure remained valid up till 2017.
Oladipo replaced Prince Olagunsoye Oyinlola as National Secretary in 2013 when the latter was forced out in an internal power play at the time.

Adeyanju similarly benefited from the sack of his predecessor, Mr. Bode Mustapha, who was also eased out in similar circumstances about the same time.

In their own reckoning, Oladipo and Adeyanju believed that their constitutionally prescribed four-year tenure should run its full course and end in 2017.

They have both joined Sheriff in a plethora of litigations seeking to validate their positions through the courts.

But they both got a raw deal from the rampaging youths when they ventured into the secretariat building to resume duties for the day.

Encircled by the angry youths, the visibly shaken Oladipo pleaded in a subdued voice to be allowed to leave the premises unharmed.

“Please, allow me to go. I will not come back again,” the frightened Oladipo pleaded amid a cacophony of denunciatory remarks from the youths.

He was eventually left off the hook and scurried away on foot, to join his car parked at a safe distance from the secretariat building.

Apparently too frightened to engage the youths in any dialogue, Adeyanju simply escaped through a back gate, abandoning his car in the car lot located in the premises.