They're heiresses to a billion dollar fortune and currently lead a jet-set lifestyle enjoying all the trappings of wealth. 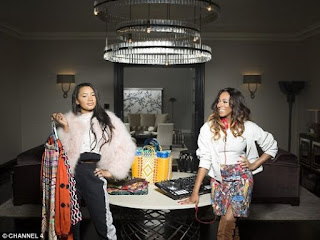 But the daughters of one of Africa's richest men say they are not content being rich and famous in his shadow, and instead want to work hard to make names for themselves in their own right. Cuppy Otedola, 23, and her sister Temi, 19, are well-known in their home country of Nigeria because their father is energy tycoon Femi Otedola, worth an estimated £650million.He was listed as the 16th richest man in Africa by Forbes in 2015 and has million pound properties in New York, Dubai, London, Abuja and Lagos.


His wealth has enabled his daughters to attend expensive private schools in England, have designer wardrobes and be waited on by ten members of staff.

As well as jet-setting between the opulent family properties around the world, they also enjoy spending time on their father's £7million yacht, have designer wardrobes and throw birthday parties that cost more than a fleet of supercars.But the sisters say their privileged upbringing does not make their lives easy and they feel under pressure to match up to their father's success.

'I am scared of always been his daughter and not getting past that, for me that means not being successful enough,' Cuppy reveals on Channel 4 documentary Lagos To London, Britain's New Super-Rich.

'I am still masked by my dad's success. If I didn't try and make it outside Nigeria I would be unhappy.' Cuppy is keen to be famous in her own right as a DJ and has been securing gigs around the world at venues including Privé, Jalouse, District and Funky Buddha.

While Cuppy admits her father's fortune has opened doors and helped her network, she then has to prove her talent behind the decks to secure more work.

She said: 'I think I am a great DJ. Network comes into it but if I don't do well I won't get asked back no matter whose daughter I am.'

Cuppy, who recently graduated from King’s College, University of London, with a degree in business and French, said she wants to become renowned around the world as a DJ and make it into Forbes 30 under 30 Rich List. 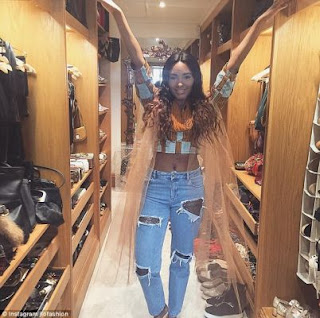 She said she does have to deal with criticism from those who think she has only had the opportunities in her career she has had so far due to her father's connections and purse strings, but she said this doesn't concern her anymore.

'People saying "this DJ is his so and so's daughter" it doesn't bother me anymore as I love what I do.

'I only worry I am not going to make the impact I want to make,'' she said as her gigs have included DJing at the inauguration of Nigeria's President Muhammadu Buhari. Her younger sister feels the same and she is busy trying to establish a name for herself in the fashion world.

Temi has set up her own style blog JTO Fashion and has 22,000 followers on Instagram.

She shares news on the latest style must-haves with her fans - many of whom are Nigerian - as she travels between the fashion capitals of Europe and shops in Dubai and London.

She said she feels her blog is 'acting as the medium between Nigeria and the rest of the world'.

Temi has been running her blog for the last year and said it has helped her establish a number of contacts with key fashion houses including Valentino. She said she works hard on her blog because 'my sisters and I were taught from a young age you can't live your life in someone else's shadow. Anything your family has done for you, you have to go and do for yourself as well.

'I think that is why my sisters and I go out and try to do our own thing because we want to be respected in our own rights.'

Temi admits she wouldn't have been able to establish her blog without her father's financial support - but she sees the help he has given her so far as a loan she intends to repay.

She has a team of professionals to help her on her photoshoots taking pictures and filming her vlogs and has even hired top fashion photographer Kate Davis MaCleod to take some of her pictures.

Kate admitted Temi's wealthy family has given her a leg up in the world of high-end fashion blogging but she said the teenager is so tenacious she is sure she would have succeeded regardless.

She said: 'Temi saw one of my fashion stories in Tatler and got in touch with me and asked if I could shoot some content for her website.

'She has the facilities to do what she wants. If she wasn't from this background I still think she would be successful in whatever she does.'

Cuppy, who DJs wearing £1,000 headphones covered in Swarovski crystals (of which she owns 15 pairs), adds that being the daughter of a billionaire also brings with it additional problems.

When she is working in Nigeria she needs to travel with a security team in a bullet proof car due to the risk of robbery and kidnapping.She said for this reason she feels much happier in London, where she has recently moved into her own apartment.
She said: 'London is bliss as I can walk down Brompton Road without a worry in the world. In Lagos I can't say "I am going out for two hours", I have to go with people, take security, my dad needs to know where I am. 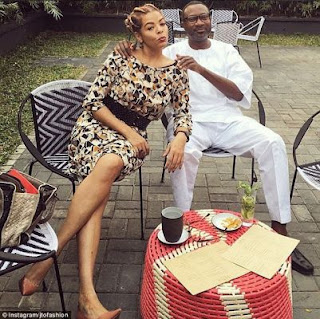 'None of my other DJ friends need security, it is kind of his fault so he has to pay for it.'

Both of the sisters love staying in London which is why they were filmed for the Channel 4 documentary airing Tuesday evening which lifts the lid on the spending habits of Nigerian billionaires.

They have become the third largest foreign consumers in Britain behind the wealthy from the Middle East and China.

Speaking of why they love London so much, Cuppy said: 'We go to Harrods a lot because it is convenient, they sell cars in there it is crazy.

Temi, who is studying for a degree in art history at University College London, added: 'We have done Dubai and Paris but always come back to London. You have the luxury shops, luxury cars, luxury houses, you can spend the money you have worked hard making.'

The girls certainly know how to spend money on throwing a good party. Cuppy recently had Marie Antoinette graduation bash at the lavish Mandarin Oriental hotel in London where her guests were served Michelin starred food on gold plates and enjoyed Champagne fountains and indoor fireworks.

Cuppy said she chose the theme because: 'I feel like I am this young woman with just so much responsibility and Marie Antoinette was Queen Of France at a young age, plus we both love dogs.'

She said the party would have costs around the same amount as 'a few Lamborghinis' but she will have to top it on her wedding day.

Meanwhile, Temi had a similarly extravagant 18th party which was Moulin Rouge themed and attended by 200 guests.

The sister say they don't play hard in this way too often, preferring to be role models to young women in their home country and inspire them to work hard to achieve their goals.

Cuppy said: 'We are setting the pace for young women who are trying to get out of a generational trend of just going to school, be good, get a job, get married and sit there looking pretty.'


As previously reported in FEMAIL, Temi insists that despite her family's wealth, her father and mother Nana have never spoiled her or Cuppy or their other siblings. 'We were brought up knowing all the success and money my father has made is his and we have to work for ourselves,' Temi told FEMAIL. 'We've definitely had that instilled in us.

'He might be bluffing but we certainly take him at face value. Anyway, we would not feel very good about ourselves just living off him.'

She said she is currently enjoying trying to establish herself as a fashion blogger.

'My favourite fashion moment was probably last summer when I attended the Valentino Haute Couture show in Rome for three days,' she recalled. 'My sister Florence and I were invited.

'It was an unforgettable trip including a private tour of the Vatican and meeting Mr Valentino himself at dinner the night before the Haute Couture show.

'It was a completely surreal moment because I've absolutely adored his line even before the creative directors Maria Chiuri and Pierpaolo Piccioli were at the helm.

'We were just talking about the whole experience and the upcoming show and he struck me as being extremely elegant and kind in his manner. He was really, really lovely.'