No Building Permit For Collapsed Synagogue Building That Killed Many 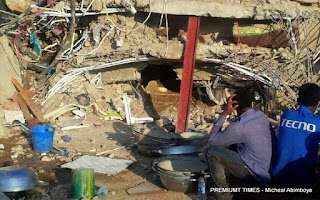 A former Lagos State Commissioner for Physical Planning and Urban Development, Olutoyin Ayinde, on Tuesday told an Ikeja High Court that the auditorium of the Synagogue Church of All Nations (SCOAN) did not have a valid building permit.

Mr. Ayinde made the revelation while being led in evidence by Idowu Alakija, the Director of Public Prosecutions (DPP) in the ongoing trial of two engineers charged with criminal manslaughter in the collapsed seven-storey guest house of the church which claimed 116 lives.

“The building collapse occurred on a Friday. I got in touch with the District Officer of the Lagos State Physical
Planning Permit Authority (LASPPPA) to confirm if the Synagogue Church had any building approval in the system,” he said.

“The Electronic Document Management System was searched and the only building approval for the church did not cover the site of the collapse building.

“By the Ministry’s definition, the approval the church had for the auditorium is no longer valid and there was no application for approval registered for the collapsed building.

“The Building Control Agency pasted their sticker on the auditorium which had surpassed the approved five-storey but there was no need for sanctions on the other building because it had already collapsed.”

Mr. Ayinde, a consultant urban planner and a fellow of the Institute of Town Planners Registration Council of Nigeria, explained his role as a commissioner in the administration of Gov. Babatunde Fashola.

“As a Commissioner, I carried out supervisory role over the Ministry of Physical Planning and Urban Development and its three agencies.

The former commissioner said building approval enabled owners of buildings to be adequately compensated when road construction or compulsory acquisition by the government occurred.

Mr. Ayinde told the court that while he visited the site of the collapsed building, there were too many first responders at the scene.

“I visited the site two days after the collapse as I was attending a retreat outside Lagos when the incident occurred.

“With me were the General Managers of LASPPPA and LASBCA as well as the Commander of the Rapid Response Squad (RRS) as an advanced team to receive Gov. Fashola.

“The first thing we noticed was that there were too many first responders, many of who were church members and we ordered them out of the site because they were disturbing the rescuers.

“I gave a directive that the rescue work should stop at ground zero to enable the material testing laboratory to conduct tests on the foundation and columns on the debris,’’ he added.

Akinbela Fatiregun and Oladele Ogundeji alongside their companies — Hardrock Construction and Engineering Company and Jandy Trust Ltd and the trustees of Synagogue Church — are facing a 111-count charge bordering on gross negligence and criminal manslaughter.

The incident which occurred on Sept. 12, 2014 led to the death of 116 persons, 85 of who were South Africans.
Justice Lateef Lawal-Akapo adjourned the case to June 22 for continuation of trial.
NAN