Some senators on Saturday demanded immunity and life pension for presiding officers of the National Assembly after their tenure in office. 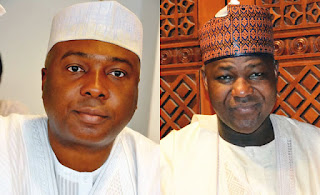 The retreat was tagged, ‘Towards Ensuring Governance Accountability in Nigerian federalism.’

The lawmakers also said the presiding officers in the legislature ought to enjoy immunity since the executive and judiciary are enjoying it.

The Deputy President of the Senate, Sen. Ike Ekweremadu, spoke in favour of the proposal for the pension.

Ekweremadu, who the Chairman, Senate Ad hoc Committee on the Review of 1999 Constitution, stressed that it was necessary for the presiding officers to enjoy such benefits.

He said, “This has nothing to do with an individual. It is about the institution. Let us not politicise it. Nobody elected the Chief Justice of Nigeria but he enjoys pension. But if we cheapen our own institution, so be it. Let us not make this a personal thing.”

Sen. Stella Oduah (PDP-Anambra) also said there was no reason why legislators should not enjoy such benefits when other arms of government enjoyed it.

She said, “The executive enjoy it. Let us stand by our leaders. They should enjoy this benefit. They act on behalf of us. They are equal to the executive and judiciary and should therefore enjoy the same benefit.”

Also, Sen. Ahmed Yerima (APC-Zamfara) said after being elected by all the lawmakers and their constituencies, lawmakers should enjoy pension.

“Governors, who spend just four years enjoy it, so presiding officers should enjoy it too,’’ he stated.

However, Leader of the Senate, Sen. Ali Ndume, spoke against the proposal.

According to him, the case of the state governors and their deputies is different as they are elected by the public.

“I am against any excessive privileges given to the senate president or the speaker. All of us were elected. If we are doing anything, it should be for all members of the National Assembly,” Ndume said.

In her submission, Sen. Oluremi Tinubu of the APC, who represents Lagos-Central, stated that principal officers had had enough.

“Principal Officers drive fleet of cars and they have other entitlements. They should not earn extra money when they leave office.

“In the last (8th) assembly, we in the minority tried to raise our voice against it. You are first, second and third among equals. Some of us do not even have cars but principal officers have so many. I think we should drop that idea,” she said

On immunity clause for principal officers of the federal legislature, 21 lawmakers voted for it favour while 15 voted against it, NAN reports.

The Chairman, Senate Committee on Works, Kabiru Gaya, said the essence of immunity was to guard some public office holders against any form of distraction while discharging their duties.

He said, “There are three tiers of government and only two arms enjoy immunity. See what is happening to the President of the Senate now (Bukola Saraki, who is standing trial at the Code of Conduct Tribunal for alleged false declaration of assets).

“We are not saying the case in court should be stopped. But even yesterday, we read in the papers that there is a fresh case of forgery of Senate Standing Rule against the presiding officers and some other persons and all is to destabilise us.’’

Ndume also supported the proposal for immunity for all presiding officers of the National Assembly.

He however argued that such immunity should be limited to civil offences committed by the officers.

He said elected officers, who were saddled with the responsibility of ensuring good governance, should be allowed to carry out their functions without any form of interference.

Akpabio said, “I propose that all principal officers of the House of Assembly, House of Representatives and Senate, should enjoy immunity like the executive. So, all parliamentarians who have criminal cases can be invested but they should serve their punishment after office.”

However, the Deputy Senate Leader, Bala Ibn N’Allah, argued that Nigerians might misconstrue the proposal for immunity for the legislature to mean that they were arrogating so much power to themselves.

He suggested total removal of immunity from all arms of government, saying, “Let us remove immunity from everyone and let there be balance. If you give immunity to everybody, a legislator may rape a lady and wait to finish his tenure before being prosecuted because he has immunity.”

At the retreat, the federal lawmakers agreed on rotation of governorship positions among different ethnic groups in states.

They arrived at the consensus, with 15 lawmakers voting in favour of the proposal and seven voted against it.

The lawmakers also proposed that independent candidates should be allowed to vie for political offices and voted against Diaspora voting.
Similarly, the senators voted against the continuous operation of joint account between the local and state governments.

After a poll on the proposal, 24 lawmakers voted in favour of financial autonomy for local governments, while six lawmakers supported the continuation of the joint account