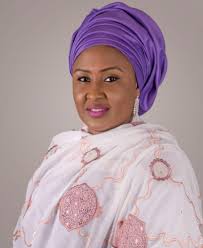 Wife of the President, Mrs Aisha Buhari has reportedly described Ekiti State governor, Ayo Fayose as an unchained mad dog, who is only out to rubbish President Buhari’s efforts. 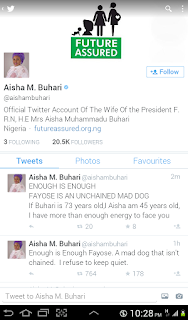 Mrs. Buhari was reacting to the claim by Fayose that she was involved in the Halliburton bribery scandal, involving a U.S. Congressman, Williams Jefferson.

Reacting via her verified twitter account, the First Lady said she had the energy to face Fayose, who had been attacking the current government than her husband who is 73 years.

She tweeted thus on 20th, June: “Enough is enough. Fayose is an unchained mad dog. If Buhari is 73 years old, I Aisha am 45 years old, I have more than enough energy to face you.”

The presidency is yet to verify this tweet currently making the round on the social media.
However, checks on the twitter handle Wednesday morning showed that the tweet is no longer there.