The police have arrested a suspected quack doctor, Victor Akpan, in the Gwarinpa area of Abuja. 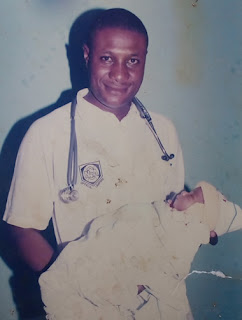 PUNCH Metro learnt that Akpan, who had been running a private hospital for 10 years, allegedly operated with forged and stolen certificates.


As a quack doctor, he was said to have performed caesarean sections, removed fibroids and delivered pregnant women of babies.

His arrest came exactly one year after the arrest of a senior medical officer with the Federal Ministry of Health, Martins Ugwu, by the police for practising as a medical doctor with stolen certificates for over nine years.

PUNCH Metro learnt on Tuesday that Akpan’s arrest was sequel to investigations by the Medical and Dental Council of Nigeria.

It was gathered that the suspect was the owner of Luna Maternity and Surgery Hospital, an outfit he opened in 2006 using a forged licence  – four years after the MDCN refused to grant him licence to practice as a homeopath.

The Head of the Inspectorate Division of MDCN, Dr Henry Okwuokenye, who had been investigating Akpan, said the regulatory agency did not grant him a homeopathic practice licence “because the school he claimed to have graduated from in Enugu State was not approved to train students in alternative medicine.”

He said an investigation by the MDCN showed that Akpan presented forged documents to unsuspecting officials of the Private Health Establishment and Monitoring Committee, an organisation, which regulates private health outfits in Abuja, to get Luna registered.

“Akpan had big name patients as far back as 2007 and had facilitated the expansion of his clinic. He hired five workers, who assisted him in an apartment where he performed caesarean sections, removed fibroids and delivered pregnant women of babies,” Okwuokenye said.

It was learnt that the suspect, who was already with the police, could be paraded this week.

PUNCH Metro gathered that Akpan told police investigators that in 2002, he allegedly paid N15, 000 to one Nwagbara, a worker with a teaching hospital in Enugu State, to get a forged MDCN practice certificate.

The certificate, sighted by our correspondent, was issued to one Dr. Awani, a 1995 Medicine and Surgery graduate of the University of Benin.

Among other documents allegedly forged by Akpan, one indicated he did his internship at Calvary International Hospital in Enugu in 1996 and had his National Youth Service Corps with the Nigerian Prisons Service in 1997.

He also claimed to have attended a course organised by the West African College of Surgeons in 2001 and a postgraduate course on Scientific Basis of Obstetrics and Gynaecology in 2002.

The FCT Police Public Relations Officer, Anjuguri Manzah, did not pick calls made to his phone.