The Code of Conduct Bureau has begun massive verification of assets declared by top serving and former public officers at the federal, state and local government levels. 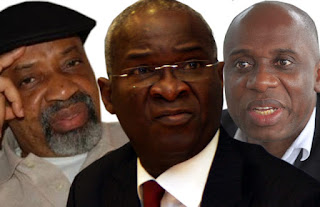 A statement by the Chairman of the CCB, Mr. Sam Saba, released by the Press and Protocol Unit of the bureau on Thursday, stated that the exercise involved physical appearance of the concerned public officers before the bureau for conference and field verifications of their declared assets.

Conference verification requires public officers to present documents relating to their declared assets to designated officials of the bureau.

On the other hand, field verification involves public officers taking CCB officials to locations of their declared landed, fixed and other assets that could not be conveniently moved to the bureau’s office.

He stated that by virtue of Paragraph 11 of Part 1 of the Fifth Schedule to the 1999 Constitution (as amended), “every public officer is required to submit to the Code of Conduct Bureau a written declaration of all properties, assets and liabilities and those of his/her spouse (if not a public officer) and his unmarried children under the age of 18 years.”

He added that any statement in the declaration, found to be false by any authorities or persons authorised to verify it, “shall be deemed to be a breach of the code”.

He stated, “To this end, the Bureau has commenced its 2016 4th Quarter Cycle of Conference and Field Verification of Assets of top public officers. Accordingly, letters of invitation have been dispatched to ministers of the Federal Republic of Nigeria, service chiefs and other top public officers.

“All invited public officers are to note that failure to honour the invitation by the CCB in this regard is a breach of the provisions of the constitution and could lead to prosecution at the Code of Conduct Tribunal.

“Public officers not yet invited are to await their letters of invitation.”

He listed 76 public officers that had been invited by the bureau with a threat of the possibility of prosecution if they fail to honour the invitation.
Among the 76 invitees are 30 ministers whom, according to the bureau, have yet to submit themselves to the exercise.

According to the bureau, ministers who have yet to submit themselves for the verification are Rotimi Amaechi (Transportation); Babatunde Fashola (Power, Works and Housing); Ibe Kachikwu (Petroleum Resources (State);  Abubakar Malami (Attorney General of the Federation and Minister of Justice); Adebayo Shittu (Communications); Dr. Kayode Fayemi (Solid Minerals and Steel Development); Audu Ogbeh (Agriculture and Rural Development).

The rest of the public officers still expected to submit themselves to the bureau are the Governor, Central Bank of Nigeria, Godwin Emefiele; Head of Service of the Federation, Mrs. Oyo-Ita Ekanem; Chief of Defence Staff, Gen. Abayomi Olanishakin; Chief of Air Staff, Air Vice Marshal Abubakar Sadique; and the Chief of Naval Staff, Vice Admiral Ibas Ibok.

The Deputy Inspectors-General of Police, who are on the list, are Ntom Chukwu, Folusho Adebanjo, Emmanuel Inyang, Maigari Dikko, Joshak Habila, Shuaibu Gambo, and Hyacinth Dagala.

An Assistant Inspector-General of Police, Abdul Bube, is also on the list.

The CCB also listed a number of Federal Commissioners of the Civil Service Commission and three Group Executive Directors of the NNPC, who are yet to submit themselves to the CCB’s verification.

In the statement, the CCB stated that the Chief of Army Staff, Lt. Gen. Tukur Buratai, and five other ministers, among 15 other former and serving public officers, had submitted themselves to the asset verification.

Buratai recently became the target of scathing public scrutiny when reports of his choice $1.5m properties, which he claimed were acquired in the name of his wife in Dubai, hit the public space.

Saba, confirmed to our correspondent on the telephone that all the 15 persons, whose assets had been verified, had been issued a certificate of Conference Verification/Field Verification.

“The Chief of Army Staff was the first to be issued his certificate. We started issuing to others last week,” he said.

Responding to further inquiry about whether the certificate issued by the CCB implied that the cleared public officers were free from liability of criminal prosecution, Saba stated, “Even though the tribunal (Code of Conduct Tribunal) is the institution with the power of adjudication in asset declaration breaches, the certificate means that from our own end, we are satisfied with the verification that we have done.”

The rest of the former and serving public officers already cleared by the CCB are the immediate past Secretary of the Government of the Federation, Pius Anyim; Chairman, Independent National Electoral Commission, Prof. Yakubu Mahmood; a former Executive Secretary of the NUC, Prof. Julius Okojie, and a former Controller-General, Nigerian Prisons Service, Ezenwa Peter.

The CCB boss commended those that had turned up for the exercise.