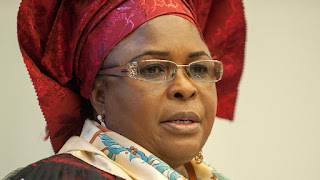 Former First Lady, Dame Patience Jonathan appears to have more explanation to make to the Economic and Financial Crimes Commission (EFCC) besides the $19 million just frozen in her accounts.


Mrs. Jonathan has just been linked with five choice properties including a N5billion hotel in Abuja, The Nation gathered yesterday.

The EFCC is currently studying documents on how the Abuja hotel (names withheld) was built.

It has also dispatched a team of investigators to Yenagoa, Bayelsa State and Port Harcourt, Rivers State for the purpose of establishing the ownership of four properties in the two cities.


The anti-graft agency is likely to confiscate the five properties once it is able to confirm that they belong to Mrs. Jonathan.

One of the pieces of evidence the EFCC has in its possession in its probe of the ex-First Lady is her cumulative pay and perks as a civil servant in Bayelsa State where she rose to the post of Permanent Secretary.

Sources said the pay details are far below the $31million which the ex-First Lady claimed as her legitimately earned money.

The EFCC is insisting that Mrs. Jonathan must account for how she came about the cash wired into the five accounts to which she is a signatory or forfeit it to the Federal Government.

One of the sources familiar with the probe said the money used in acquiring the properties under investigation appears to be gratification to Mrs. Jonathan when her husband was in power.

The source said: “Based on intelligence report, we have isolated five properties allegedly identified with the ex-First Lady. These properties include a N5billion hotel in Abuja and four others in Yenagoa and Port Harcourt.

“A special team has gone to verify all these assets in the affected areas including the contractors engaged, the mode of payment to them, relevant land registration documents, and associates used as fronts.

“In the next few days, we will start questioning all those involved in the acquisition or building of the assets. We are lucky that this investigation has a lot of e-transaction and computerization components. There is no hiding place for anyone involved.

“If at the end of the day the five assets belong to the ex-First Lady, we will approach the court to place all these assets under Interim Assets Forfeiture in line with Sections 28 and 34 of the EFCC (Establishment Act) 2004 and Section 13(1) of the Federal High Court Act, 2004.”

Section 28 of the EFCC Act stipulates that: “Where a person is arrested for an offence under this Act, the Commission shall immediately trace and attach all the assets and properties of the person acquired as a result of such economic or financial crime and shall thereafter cause to be obtained an interim attachment order from the Court.”

Section 13 of the Federal High Court Act reads in part: “The Court may grant an injunction or appoint a receiver by an interlocutory order in all cases in which it appears to the Court to be just or convenient so to do.

“Any such order may be made either unconditionally or on such terms and conditions as the Court thinks just.”

Responding to a question, the source said: “If our investigation reveals that the assets are not owned by Mrs. Patience Jonathan, we will return them to their legitimate owners.”

The Nation also gathered that the EFCC is not about to defreeze Mrs. Jonathan’s accounts under investigation.

“We have retrieved documents on the pay package and monetized perks of Mrs. Patience Jonathan when she was a Permanent Secretary in the government of Bayelsa State. Her total emoluments do not tally with the funds remitted into the five accounts,” an EFCC source said.

“She owes us a duty to explain how she came about these funds. Our investigation showed that the funds came from gratifications; it is left to her to prove otherwise.

“The good thing is that the ex-First Lady was the one who sued EFCC demanding the release of her $31million. She has a duty as a former public officer to explain how she earned the funds. Did she declare these funds in her Assets Declaration Form as a Permanent Secretary?

“We are happy that the case is in court and the onus is on her to prove ‘beyond reasonable doubt’ that she is the owner of the funds. If we had initiated the action, some people by now will be accusing EFCC of witch-hunt.

“But she went to court to exercise her rights under the law. The same law demands that you must seek equity with clean hands. I think the press should take more than a passing interest in what is going on in the court.”

The anti-graft agency claimed last week that it has established a prima facie case of money laundering against the ex-First Lady and 10 others.

The 11 suspects may face trial for money laundering if the recommendation of the investigative team is upheld.

The other 10 suspects indicted by the investigative team are a former Senior Special Assistant ( Domestic / Household and Social Events to the former President), Dr. Dudafa Waripamo-Owei Emmanuel; Damola Bolodeoku; Dipo Oshodi; Theodora Varinik; Pluto Property and Investment Company Limited; Seagate Property Development and Investment Limited; Globus Integrated Services Limited; Trans Ocean Property and Investment Company Limited and Skye Bank Plc. The report said in part: “Based on the investigation so far carried out, it has revealed that the four fraudulent VISA Platinum USD Card accounts used by Mrs. Patience Goodluck Jonathan  has a cumulative balance of $14,029.881.79 which has been swept Post No Debit Card category.

“Considering the above stated findings, we can safely conclude that a prima facie case of conspiracy to retain proceeds of unlawful activities, retention of the proceeds of unlawful activities, money laundering contrary to Section 15(3) and 18(a) of the Money Laundering (Prohibition) (Amendment) Act, 2012 and forgery contrary to Section 1(2) (c) of the Miscellaneous Offences Act,  Cap M17, Laws of the Federation, 2004 have been established against the aforementioned suspects.”

Also, Mrs. Jonathan has admitted that she is the owner and signatory to the five accounts in which the Economic and Financial Crimes (EFCC) found over $22.3million.

She said she has never received any monies from any unknown sources paid into the five accounts.

But she was silent on the sources of the cash wired into the affected accounts.

She however explained that the accounts were opened to facilitate her travel overseas particularly for medical treatment, sundry purchase for herself and her late mother Mrs. Charity Oba (Mama Sisi).

She indicted Wampemo-Owei Dudafa who was the Special Adviser on Domestic Affairs to the former President Dr. Jonathan, and Skye Bank officials for registering phony companies for four of the five accounts.

A statement by her Media Office said: “Sometime in 2013, following the advice of top officials of the EFCC then in the company of Wampemo-Owei Dudafa who was the Special Adviser on Domestic Affairs to the former President Dr. Jonathan, that she should not travel oversees with cash otherwise she may contravene Money Laundering laws, Mrs. Patience Jonathan agreed to open accounts with Skye Bank Plc and directed Dudafa to see to it.

“Dudafa came with two bank managers (Officials) of Skye Bank Plc with the account opening forms which she duly signed.

“These accounts were all dollar based Platinum Visa cards in respect of five accounts.

“When the bank officials brought the ATM cards for the said accounts of which she is sole signatory, she discovered to her surprise that only one of these accounts bore her personal name while four were in the names of companies not known to her.

“She immediately complained about this anomaly to Dudafa and the bank officials, Demola Doledeoku and Dipo Oshodi came back to the villa with forms to change and convert the said accounts to the personal name of Mrs. Jonathan.

“This was her firm request which the bank officials promised to effect immediately and she duly completed account conversion forms and signed the mandate forms as a the sole signatory, but as it would appear, the said bank officials did not change the Account names despite her request.

“It was in 2014 or thereabout that she was given the ATM cards for all the five accounts with the bank officials promising to exchange the cards for the four reflecting her correct names. This again, the banks officials failed to do despite her repeated request


thenation
Posted by MAN ABOUT TOWN at 12:07 AM