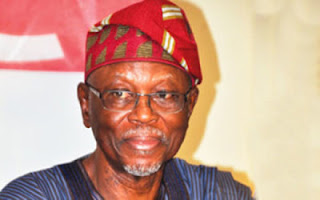 A member of the National Working Committee of the All Progressives Congress (APC), Comrade Timi Frank, yesterday called on President Muhammadu Buhari to speak out on the crisis rocking the party to save it from collapse.

Some APC youth leaders from Ondo State also took a swipe at APC National Chairman Chief John Odigie-Oyegun  for his role in the crisis rocking the chapter.

Frank described Odigie-Oyegun as acting incompetently, adding that the call on him to resign by former Lagos State Governor Asiwaju Bola Tinubu justifies his position “that Oyegun cannot lead the party”.

He said the President’s silence was not in the party’s interest, pointing out that another one year of Oyegun’s leadership would spell doom for it in the 2019 general elections since more crises will be unresolved.


Frank said: “I want to use this medium to appeal to Mr. President because it has got to a situation
where he can no longer be silent on the party’s internal issues.

“The President must speak out and save our party. He is the leader of the party and must not leave the party in the hands of these people that cannot resolve any crisis.

“Every party member is loyal to the President and he should see the need to immediately call an emergency NEC meeting to enable us come together and look at these allegations. They are not just mere allegations, but very critical ones which must be looked into by the party and position taken.

“If we don’t do something, even APC supporters in Ondo State will sabotage the process for us because they are not happy. We must do everything possible to bring all aggrieved persons together.

If we don’t take emergency steps to resolve these issues, we will have ourselves to blame.”

Arguing that he had been vindicated by Tinubu’s position, Frank said: “Today, we have seen one of the founding fathers of our party, a national leader, agreeing with my earlier call that Oyegun should resign as national chairman. That should let you know that I forsaw what they didn’t see. I knew from the outset that he could not take the party anywhere.

“The truth is coming our today and it has shown that Oyegun cannot take this party to where the party wants to get to. Are we still going to deny that there is a crisis now that the national leader and founding father of the party has come up to make his position clear that Oyegun should resign? Is it not clear that there is crisis in the party?

“What has happened has shown clearly that Oyegun cannot do the job. A few days ago, Mr. President launched Change begins with me campaign. But for us, the change has to start from within the party so that Nigerians can follow.

“Based on this weighty allegation from our national leader and founding father of the party, I want to restate my earlier position that we must call an emergency NEC meeting.

“If Oyegun knows that he has nothing to hide and that whatever Tinubu has said about him is not true, I am challenging him to immediately call an emergency NEC meeting to enable us come together and look ourselves in the face and tell ourselves the truth and see how we can resolve this internal crisis.

“If we cannot resolve this crisis now, we may never be able to resolve it. Since the last meeting we held six months ago, none of the decisions reached at the NEC meeting has been implemented. That has shown incompetence on Oyegun’s leadership.

“We agreed at that meeting that there should be a mini convention to fill vacant positions among others such as downsizing the BOT and having an Elders Council. Today, if I have issues, where will I go to?”

The youth leaders from 18 local government areas of Ondo State queried  why Odigie-Oyegun overruled the verdict of the APC National Working Committee (NWC) that a fresh governorship primary should be conducted.

At a news conference attended by the APC leaders, their deputy chairman, Saheed Lateef, urged the party’s national leadership to as a matter of principle and ethos of the APC uphold the recommendations of the appeal panel.

The panel had affirmed that the election was compromised with fake names in the delegates’ list. It consequently called for fresh election.

Six of the 11-member committee of the NWC had recommended nullification of the primary election and conduct of a fresh  one.

But Odigie-Oyegun reportedly suppressed the majority decision and upheld the “disputed” poll in favour of Mr. Olurotimi Akeredolu (SAN).

“Since we believe in the anti-corruption crusade of President Muhammadu Buhari, this must reflect and should be extended to the internal arrangement of the progressives party.

“Our position is not against any individual, but the process that characterised the primaries,” Lateef said.

The youth leader said the position was reinforced by their commitment to the principle of democracy that emphasised that “minority cannot overrule the majority decision”.
Lateef noted that the struggle to ensure the formation of progressive government in the Sunshine State should not be defeated because of selfish interest of some individuals

thenation
Posted by MAN ABOUT TOWN at 1:45 AM