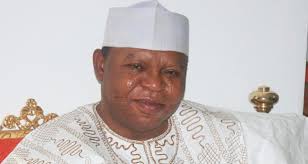 Family members of late Governor Abubakar Audu of Kogi State were arrested by the police for alleged
“culpable homicide, robbery and mischief”, a spokesperson for the police in that state has told PREMIUM TIMES.

Mr. Audu’s eldest son, Mohammed, and some 15 other family members were arrested on Wednesday.

The spokesperson, who merely identified himself as ASP Ovye, confirmed the arrest on Thursday morning.

He had earlier told this newspaper that he needed time to contact the relevant police unit for information on the arrest.

He said the arrests were effected by the Special Anti-Robbery Squad, SARS.

Mr. Ovye did not give details. He advised further questions be directed to the state Commissioner of Police, Abdullahi Ibrahim.

“It’s after investigation that we will tell you,” he told PREMIUM TIMES. “What I know is that they were reported and we acted.”

Asked when the arrested persons would be charged to court, he said “when we complete investigation”. He declined further comments.

But this newspaper understands that the arrests followed an attack on Mr. Audu’s younger brother.

He was physically attacked on his return to Ogbonicha, the ancestral home of the Audus in Ofu Local Government Area, by community members aggrieved with Governor Yahaya Bello’s government, PREMIUM TIMES understands.

A day after the anniversary ceremony, Mohammed, late Audu’s eldest son, in a statement on behalf of the family, mocked the governor and said he should have used resources meant for the ceremony to pay workers.

But Mr. Bello denied masterminding the arrests in a statement yesterday.

He said the police should be free to work, and that politics should not be linked with criminality.

Mohammed Audu is fighting through the courts alongside James Faleke to remove Mr. Bello as Kogi Governor.

Mr. Faleke was the running mate to late Mr. Audu on the APC ticket in last year’s governorship election.

After Mr. Audu’s sudden death the day after the poll, the party drafted Mr. Bello in to continue as its candidate in the supplementary election.

Premiumtimes
Posted by MAN ABOUT TOWN at 3:42 AM