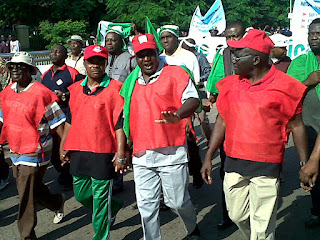 The Nigeria Labour Congress has said it will mobilise Nigerians for nationwide protests to resist the plan by the Federal Government to sell strategic assets under the guise of using the funds to be generated to get the country out of recession.

The President of the NLC, Mr. Ayuba Wabba, said the consequences of the proposed sale of the strategic assets would be more grievous if Nigerians did not stop the government from carrying out the policy.

He made the comment on Monday in Abuja while inaugurating a think-tank of the NLC and the Academic Staff Union of Universities, entrusted with the responsibility of leading the intellectual engagement with the Federal Government on the contentious move to sell the country’s assets.

According to him, the NLC is making preparations to battle the Federal Government in courts to prevent the planned sale of the assets, explaining that the congress had secured the services of 20 volunteer lawyers, who had offered their services to the NLC on the issue.

Other members of the committee are Dr. Yemisi Bamgbose, Mr. Issa Aremu, Mr. Sonny Atuma, Dr. Peter Ozo-Eson, and Mr. Auwal Mustapha, who is the secretary.

Wabba stated, “While it is important to rescue our country from the current economic recession, sale of our commonwealth and strategic assets is certainly not a move in the right direction, and all Nigerians must have the courage to oppose it.

“All the (national) assets are under threat depending on the interest of who is speaking; the NLNG, refineries, all the assets are presently under threat. If we work together, then we can try to defend these assets. It will take the effort of all of us to stop them.

“Nobody will buy what is not profitable. That is why people are looking in the direction of the most profitable.”

Wabba stressed that the problem with Nigeria was corruption, which had become endemic in both the private and public sectors, and not the economic model to use.

The NLC president believed that politicians, who stole so much money and had been hiding the loot, were looking for ways to buy the assets with their looted funds.

Wabba assured Nigerians that organised labour was united in the quest to preserve the nation’s strategic assets for Nigerians and future generations.

“We are sure of ourselves; this is of concern to every citizen. We should not allow the bidding of those few who don’t mean well for the country. On the issue of selling out, we are on the same page, we will do everything possible to try to work together.

“We shouldn’t be discouraged because of the fact that we envisage sabotage or an effort to undermine the struggle. In every struggle, there would be moves to sabotage such,” he added.