The presidency has decided to keep mum on a minister who was indicted for fraud when he held office in a different capacity. 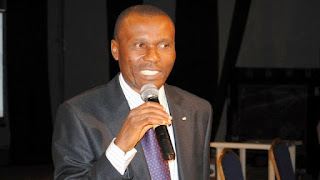 The Minister of Niger Delta Affairs, Usani Usani, was indicted for financial impropriety for his role when he held office during the military era.

PREMIUM TIMES is in possession of a government white paper which documented Mr. Usani’s indictment after he was found guilty of fraud in 2000 by a panel established by the Cross River State Government.

Mr. Usani, who had just finished serving as the Cross River State Commissioner for Agriculture, Water Resources and Rural Development, appeared in 1999 before a government committee set up to investigate financial impropriety among officials of the preceding military administration in the state.

The committee, officially known as Financial Impropriety/Verification Standing Committee, was inaugurated in 1999 by the then governor, Donald Duke.

It was chaired by Orok Oyo, and had Andy Ikpeme, Ekpe Ita, Otu Oka and Akomaye Adie as members.

According to the document, Mr. Usani, because of his alleged intent to defraud the government, was said to have refused to apply government approved scales, when he paid out some money as fees to Gersh Henshaw & Company, a firm of estate surveyors and valuers, which handled the contract for the valuation of vehicles, workshops and equipment belonging to the Cross River State Water Board.

The valuation was said to be part of the African Development Bank water project in the state.

Gersh Henshaw & Company was paid a lump sum in dollars, the document said.

Mr. Duke’s administration, apart from accepting the committee’s report, directed that the N16,323,150 be recovered from Mr. Usani, and that he should be prosecuted.

The government, according to the document, accepted to forward particulars of the transaction to the Code of Conduct Tribunal, with a complaint of financial impropriety and abuse of office against Mr. Usani.

It also accepted to blacklist Gersh Henshaw & Company from getting further patronage from the government.
PREMIUM TIMES couldn’t verify, as at the time of publishing this report, if the state government recovered the money from Mr. Usani, and if it also handed over the case to the Code of Conduct Tribunal.

Mr. Oyo, the chairman of the committee which indicted Mr. Usani, said the minister never went to court to challenge the indictment.

Like most other white papers by various tiers of government, which some analysts have blamed for the impunity among public officials on corruption matters, Mr. Usani’s indictment appears not to have been followed through by the Cross River government.

The current Attorney-General and Commissioner for Justice in Cross River, Joe Abang, declined to be interviewed by this newspaper when he was contacted on phone.

His counterpart in the Ministry of Information, Rosemary Archibong, told PREMIUM TIMES that, “You can talk about government white paper if you have it. I am not in the position to comment on the criminal aspect of it, because it is only the court that can decide on that”.

None of them would comment on whether the state planned to take any further action on the indictment.

Mr. Usani, who served as commissioner from 1997 to 1999 under the military administration of Colonel Umar Ahmed, did not pick calls nor respond to text messages sent to his telephone line.

The 55-year-old politician, who is also a pastor, was Chairman of the All Progressives Congress in Cross River before he was appointed minister in 2015 by President Muhammadu Buhari.

Before then, he contested for governorship in the state in 2003 under the National Democrats (ND) and again in 2012 under the Action Congress of Nigeria, ACN.

It is unclear how Mr. Usani was able to scale through the usual thorough background and security checks when he was slated for a ministerial appointment.

For an administration whose major mantra has been the war on corruption, the Muhammadu Buhari administration has kept mum on the minister’s indictment.

When PREMIUM TIMES contacted presidential spokesperson, Garba Shehu, he asked that an email be sent to him. He is yet to respond to the email over two days after it was sent.

Should the presidency decide to shield Mr. Usani, he may not be the first to enjoy such privilege by the administration.

The administration has received a lot of criticisms from Nigerians for its treatment of corruption allegations levelled against the current Chief of Army Staff, Tukur Buratai, and the Minister of Interior, Abdulrahman Dambazau.

Mr. Usani’s case is, however, unique as his indictment has been made official by a government gazette.

...Premiumtimes
Posted by MAN ABOUT TOWN at 6:34 AM