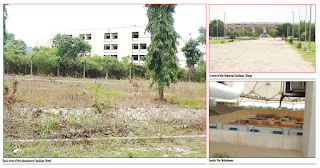 Itinerant herdsmen have invaded the $300 million National Stadium Complex in Abuja, turning it into a grazing reserve for their cattle. This is in spite of an existing order prohibiting open grazing in the Federal Capital Territory (FCT), an order the Abuja Environmental Protection Board (AEPB) is empowered to enforce.


The herdsmen, who usually invade the stadium in groups to feed their cattle, sometimes overwhelm the stadium security officials who try to stop them from their activities, especially at the Package B section of the stadium.

“It has been a routine for these herdsmen to herd their cows to this place for grazing, especially in the last one year. They invade the stadium at will and it seems nobody is ready to stop or caution them,” said a security official attached to the stadium.

When our correspondent sought the view of the stadium manager, Mr. Sati Mbok, he said that the management has been making frantic efforts to stop the herdsmen, but they have rather continued to increase in their numbers.

New Telegraph learnt that the herdsmen, who are usually armed with some dangerous weapons, have become a source of concern to those who are managing the expansive stadium.

In September last year, the Federal Capital Territory Administration (FCTA) issued an order banning the practice of open grazing of cattle in the territory and charged the AEPB to enforce the ban. One year after, the herdsmen and their cows are still roaming the streets and highways in Abuja. Public Relations Officer of AEPB, Mr. Sam Musa, told our correspondent that the agency has taken several measures to tackle the problem of the herdsmen, but have encountered a lot of impediments in their bid to flush the cows out of the city.

“We’ve really been warning and sensitizing them and the process is ongoing because you know some of them are new in the city and they keep having the information. We have been working together with their leaders to also sensitize them. You know education is number one; once you educate people and they can understand why they should not do it, our job becomes easier,” Musa said.

New Telegraph investigations have, however, revealed that beyond the challenge posed by these herdsmen, underutilization and poor maintenance culture has turned the $300 million National Stadium, Abuja, into an abandoned edifice, with many of its key facilities rusting away and a huge chunk of the expansive sports complex overgrown with weeds.

The multimillion-dollar edifice was built when Nigeria hosted the 8th All Af- rica Games 2003 (COJA) 13 years ago, but has become a shadow of itself over time. Investigations by New Telegraph revealed that the Stadium hardly hosts events since most of the sports federations took their activities outside the Federal Capital Territory (FCT) where they would enjoy corporate sponsorships due to lack of funds. Often times, the main bowl serves as venue for religious and cultural activities, which pay little or nothing in return.

Unlike the entertainment and social recreation venues, social functions, such as inter-house sports and games amongst schools and other institutions, which generates revenue for the National Stadium in Lagos, the reverse is the case in Abuja which groans under lack of funds for maintenance.

New Telegraph gathered that the challenge of neglect of the stadium became compounded following the recent directive by the Minister of Sports, Mr. Solomon Dalung, that the staff of the scrapped National Sports Commission (NSC) be moved back to the Ministry of Youth and Sports. The most dilapidated section of the stadium is a 240-room hotel facility with a Conference Centre that have been overgrown by weeds and taken over by rodents and reptiles.

A visit to the facility also showed a portion of it is now inhabited by some poor Nigerians who use it as their shelter in the face of lack of accommodation in the city. A visit to the stadium revealed that apart from the main bowl of the stadium, which usually hosts international matches involving Nigeria, most of the other facilities were in  deplorable state.

The Velodrome, one of the key facilities in the stadium, has been under lock and key for the past one and a half years. A closer peep revealed that there were thousands of gas cylinders and cooking stoves in the main bowl of the Velodrome. New Telegraph learnt that the items were kept there by a political party during the last general elections.

According to a security guard at the complex, the items were supposed to have been distributed to the supporters of the unnamed political party, but was later suspended just before the 2015 general elections.

Currently, the Nigeria Cycling Federation (NCF), which used to operate from there, has been sent packing and made to carry out its business from the Package B area. However, a visit to the Package B area of the       com  plex also showed that it has largely been neglected given the bushy outlay of its entrance.

The surrounding of the complex is overgrown with weeds while a corner of the entrance now serves as a waste dumpsite, a situation that has turned that section of the complex into a filthy zone.

The Olympic-size swimming pools have become home for tadpoles, toads and frogs as the water in them have turned greenish and stinking. When New Telegraph asked why the pool was abandoned to mosquitoes and tadpoles, a staffer in the complex, who would not want his name in print, explained that the water in the pool was not dirty, but that it was the basement of the pool that had accumulated much dirt, which left the pool polluted.

“The pool is being main tained by the federation that has not got subvention for a long time now. However, what you see now will soon be a thing of the past, as the pools are being worked on. The machines that pump water into it are being serviced and where necessary, are being replaced.

“The painting of the structure will commence soon. Cleaning the swimming pools and its diving slabs may cost nothing less than half a million naira and the cleaning exercise has to be done on a regular basis, but the funds are not there. “It is for this reason that we are calling on members of the public to come and patronise the facility so that we can have returns to maintain the place.

The Sports Ministry is not always forthcoming when it comes to releasing funds for facility maintenance,” he said.