Sell It Off! Govs Okay Sale Of National Assets To Battle Recession 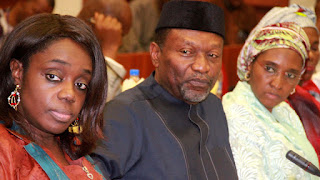 Governors of the 36 states have endorsed proposals of the Federal Government Economic Management Team (EMT) under President Muhammadu Buhari to tackle the economic recession.


The governors, at the meeting of the National Economic Council (NEC) yesterday in Abuja, also gave backing to the Minister of Budget and National Planning Udoma Udo Udoma and his Ministry of Finance counterpart, Mrs. Kemi Adeosun for their policies, which they said are tailored to revive the economy.
The governors met with Vice President at the Presidential Villa to deliberate on the state of the economy where they endorsed Udoma and Adeosun barely a day after the leadership of the Senate called for re-assignment of the duo, citing incompetence and inability to manage the economy.

Addressing State House Correspondents after the NEC meeting, Governor of Kebbi State Atiku Bagudu Abubakar said those in attendance expressed support for the plans and proposals of the government to tackle recession.
“Council members expressed confidence in and unanimously commended the EMT, as well as the Budget and National Planning and Finance ministers for their presentations to the council, praising their efforts, competence and capabilities,” he said.
Governor Abubakar who was joined by his Oyo State counterpart, Abiola Ajimobi and the deputy governor of Ogun State during the briefing attributed the current economic predicament to the country’s dependence on single commodity, crude oil.
They noted that the collapse of oil price to less than $30 per barrel in Q1 2016 is another reason for the recession.
Highlights of the meeting which were later made available to reporters by the vice president’s media office indicate that the governors agreed that the economic challenge provides an opportunity to restructure and reset the economy.
The statement said that the EMT was working on a plan to inject funds into the economy through asset sales, advance payment for licence renewals, infrastructure concessioning and use of recovered funds to reduce funding gaps in the budget.
The NEC was also briefed on the balance in Excess Crude Account (ECA) which is now $2.453 billion as at September 20, 2016.
The meeting also discussed government’s target of N1billion fund for Public Private Partnership (PPP) on housing development and mortgage provision. The money is expected to deliver family housing priced from as low as N2.5 million up to N18 million delivered in a ready-to-occupy condition with essential services (water and power connected). The delivery target is 400,000 to 500,000 housing units per annum.
Adeosun reported to the council that N50 billion has so far been disbursed to state governments, and the facility is ongoing.


Guardian
Posted by MAN ABOUT TOWN at 1:15 AM