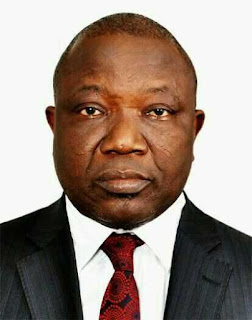 A senior staff of Ecobank Nigeria Limited Gbite Mathew Adegoke has sued the bank before a National Industrial Court, Lagos for wrongful termination of employment, claiming N1.2 billion as damages and special damages having suffered near paralysis in the course of being on official duty.

The bank has however denied owing him any duty of care save what is established in his contractual employment.

In a statement of facts filed by Adegoke’s lawyer, Jiti Ogunye before the court, the claimant stated that
he was employed by Oceanic Bank on April 11 2006 as a Manager and was the pioneer branch manager of the bank at Ota, Ogun State.

To Adegoke’s credit, according to his claims filed in court, he was responsible for opening up the bank in the Western Zone, particularly in the in the rural areas.

He assisted the bank in opening more than 10 branches.

One the branches he opened that really benefitted the bank is the Canaanland branch.

Canaanland is the headquarters of the Living Faith Church (Winners Chapel) where he grew the balance sheet consistently from a paltry N1.2 Billion to N21 Billion.

At this juncture, he received a letter of commendation from the Managing Director of the bank.

Trouble however started for him on July 11, 2009, while on a trip to Lagos for an official meeting, he encountered armed robbers on Lagos- Ibadan Expressway.

The armed bandits shot at him and their bullets penetrated his spinal cord, rendering him a near total paralysis.

This was before Ecobank took over Oceanic Bank in a merger.

The management of Oceanic bank immediately took responsibility by transferring him from the University of Ibadan College Hospital to Lagoon Hospital, Lagos.

At Lagoon, doctors battled for five hours to save his life.

Bullets were extracted from his body while the doctors also were able to extract the lone bullet that was lodged in its spinal cord.

All the expenses were borne by his employers- Oceanic Bank.

Immediately after he was stabilized, the bank flew him out of Nigeria to South Africa for a better treatment.

It was in South Africa that it was discovered that the bullet lodged in his spine had affected the nerves that controls his movement.

He was in a South African Hospital for four months where doctors battled day and night to save him from total paralysis and restore the use of his legs.

It was while in South Africa that the Central Bank of Nigeria (CBN) announced the takeover of Oceanic Bank and subsequent merger with Ecobank.

After the takeover, it became the case of a new Pharaoh who knew not Joseph. Adegoke averred that even while in the hospital in South Africa, his salaries were paid in full for three months (July – September 2009), reduced by 50 per cent from October- December 2009, and between January- April 2010, his salaries were stopped, leaving him and is family at the mercy of friends and relations.

Since he could no longer undertake even small personal chores, he had to rely on his wife, who had to abandon her business to take care of her husband.

Because of the hardship, Adegoke reluctantly came back to Nigeria in his near paralysis state and reported back to work.

However, more woes awaited him when he reported back to work.

He was asked to proceed on suspension on the account of a cheque that was returned while he was in hospital in South Africa.

The Human Resources Department of Ecobank did not recall him until February 5, 2010 after thorough investigations into circumstances that led to the suspension.

The bank rescinded its decision.

He was then directed to resume work as the Branch Manager of Canaanland Branch on March 29, 2010.

Adegoke despite his health conditions plunged himself back to work and under two years he was again promoted as the Area Manager of the bank in August 2012.

“The balance sheet then was N13 Billion, but he also grew same between January and October 2013 from N14 Billion to N21 Billion and this feat earned him the Managing Director’s letter of commendation and a notch increase in January 2014”, he averred.

Unfortunately, it was in this same year that his victimization by his bosses started.

He was queried by the Regional Manager, Mr Samuel Afonja for losing a business to competition.

The query was a feigned reaction to loss of business, but was in fact in reaction to the former’s refusal to be bullied and intimidated.

The business he allegedly lost was on the account of Covenant University which opened its own Microfinance Bank and placed its funds there rather than Ecobank.

The bank was not happy the he could not use his closeness to the leadership of the Living Faith Church to swing the business to the bank.

He was stressed to the extent that his doctors had to recommend a two day sick leave for him to attend to his health which by now had deteriorated again.

After the two days, he applied for his annual leave to enable him take care of his health.

The leave was not approved for more than two weeks.

At this juncture, his health could no longer wait.

He nominated the most senior branch manager under him to act on his behalf and proceeded on leave.

The Executive Director, Mr Kingsley Aigbokhaevbo called him up angrily rebuking his proceeding on leave.

He had to force himself back to work.

The next thing he saw was that on November 19, 2014, he was redeployed to Canaanland and downgraded to the position of Branch Manager and was forced to accept the downgrading before his leave was approved.

Sensing that he was being set up for termination of his appointment, he caused his lawyer to write a petition over his unfair treatment and programmed termination of employment to the Group Management.

The letter was dated December 16, 2014. The bank replied the letter on January 6, 2015 but did not address the issues he complained of.

On January 21, 2015, Ogunye again wrote another letter over his demotion, unfair treatment, and programmed termination of employment.

By February 2015, the bank carried out a restructuring and after, he was not assigned any office until January 6, 2016 when his appointment was terminated.

Not satisfied with the termination, the defendant approached the court seeking the award of special and general damages of N1.2 Billon from the bank.

However, in the defence filed by the bank’s lawyer, Chief Anthony Idigbe SAN, the bank refuted Adegoke’s claim. In its 101 paragraph statement of defence filed before the court, the defendants denied most of the averments of the claimant.
The bank stated that “in a bid to re-engineer and restructure her workforce determined the contract of employment of some of its members of staff and the claimant was affected by the exercise.”

“After the restructure of her workforce, the claimant was deemed surplus to requirements and was subsequently issued a letter of termination of employment dated January 4, 2016.”

The banks stated further: “The defendant was never pushed out of employment, forced out in a precarious health condition, rendered unemployable and demoralized, rather, in order to restructure her workforce, the contract of employment for some staff was determined and the claimant’s employment was terminated”, it concluded.


...gavelinternational.org
Posted by MAN ABOUT TOWN at 8:12 AM