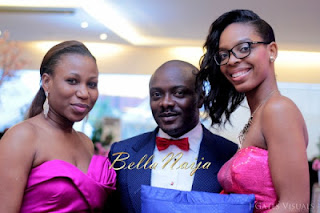 He is not exactly a new entrant to the social scene. Just that Ovunda Akarolo, who is the most popular son-in-law of Chief Lulu Briggs, has hitherto been a bit part socialite. Things have changed now though. His wife, Solate who is the DMD of the family owned business, MoniPulo Ltd, is sitting on a multi billion empire and expectedly, Ovundah is gradually coming into his own as a redoubtable rocker and heavy spender. Good-looking, with an athletic built; he understands the lingo of night life and was quite popular for his go-go life in the
capital city and Port Harcourt.

Though happily married, he is a hit with wondrously sculpted women on account of his sheer generousity and club hopping nature in Abuja. Things are however looking up for Ovundah. Among other new oil deals, he now handles deals on behalf of his wife, Solate, thanks, once again to the boundless benevolence of his father in-law, Briggs.

Lulu-Briggs is the founder and chairman of Moni Pulo Limited, an oil exploration and production company. Moni Pulo was awarded its first oil block in 1992 when the Nigerian president at the time, Ibrahim Babangida, was encouraging indigenous participation in the upstream sector of the oil and gas industry. The company currently has oil blocks in Ondo state, Abia and Akwa-Ibom state. Its flagship project, OML 114, produces 10,000 barrels per day. Along with his wife, he funds the O.B Lulu Briggs Foundation, which provides humanitarian services to rural communities.

...theinfluence
Posted by MAN ABOUT TOWN at 6:30 AM