Yes, second chance is a treat for the man who had experienced fortune and rank only to lose it. Fun-loving businessman, Wale Tinubu has finally reencountered bliss in trying hours, like the sojourner who discovers a babbling brook in the middle of the Sahara. 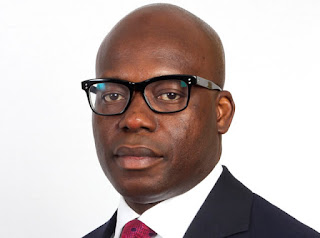 No doubt, Wale has a reason to smile again as his company is one of the 39 companies awarded the mouth-watering crude oil contracts by NNPC.
Interestingly, however,  Wale is not invincible after all. The Oando boss, like the proverbial yo-yo, is manipulable and subject to the whim of gravity and the arbitrary string of fate. He really suffered a great loss in business last year. On his watch, Oando Plc recently suffered N189 billion loss thus raising eyebrows and speculations about his capacity to steer the ship of the oil corporation to prosperous bights.
In the wake of the crisis, Wale appeared on television, looking somber and downcast, as he tried to explain the reasons for the loss in a subtle image laundering campaign. His attempt at currying the favour of his company’s publics however, generated virulent criticisms across the nation’s oil and financial business sectors.


It would be recalled that while the ruling party campaigned and fought vigorously to win the last  general elections, Wale contributed immensely to the party’s dreams of greatness. He empowered the party by providing cars, state of the art Sports Utility Vehicles (SUVs), a private jet and cash sums.
Having being led to believe by the party’s chieftains that he would profit immensely from his association with the party, Wale supported the APC’s campaign big time.
Wale also believed that his interests were adequately protected being a sibling to the national leader of the APC and two-time governor of Lagos state, Bola Tinubu. When it didn’t happen on time, he lost hope in the government and ditched all hopes of enjoying compensation for his contributions to the success of the incumbent president’s electoral campaign.
Today, Wale has proved that he is no rookie in the cut-throat world of business in the country’s oil sector. He is a gifted survivalist; for instance, just when many have written him off on the strength of his brush with few Nigerian banks over certain transactions that upset some of his businesses,  Wale made good his promise to bounce back to the economic arena more powerfully and convincingly, courtesy the new oil deal.