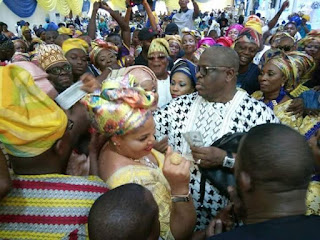 He was guest at the wedding of Wesco Bet Boss, Adewale Osbinubi.

The event held which held at Adeola Odutola Hall, Degun Junction in Ijebu Ode Ogun played host to heavy weight politicians and celebrated figures in
other spheres of life from the region.

Lekan Mustapha, the well known politician was equally at the event.

His in law – younger brother to his wife and protégé of king of fuji music Wasiu Ayinde Marshall – Kolade Onanuga was actually on the band stand.

With that, even Mustapha didn’t stand a chance when politician in the eye of extradition storm Senator Buruji Kashamu made his entry into the event.

‘’he overshadowed all that dignitaries already on seat and those that came after’’ a source claimed.

Buruji Kashamu’s name and praises were said to immediately become the anthem of musician Kolade Onanuga.

And the hall reportedly went into a frenzy of attempts to interact with the troubled politician.

Immediate past Governor of Ogun state Gbenga Daniel (also known as OGD) was said to have abruptly made his exit barely five minutes after Kashamu arrived. 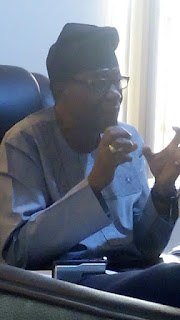 ‘’Naturally you don’t expect someone of OGD's calibre to sit down and suffer the indignity of special and continuous recognition to Kashamu at such a gathering’’ a source provided insight for the former governor’s action.
Societynowng.com gathered that throughout the time he stayed Kashamu’s praises were the sing song on the lips of the musician relegating every other persons at the occasion to second place – including the ‘’celebrants’’.

This development is against the background that  the embattled Senator is in the midst extradition storm over alleged drugs offences across borders – though he insists he innocent and has nothing to worry about.