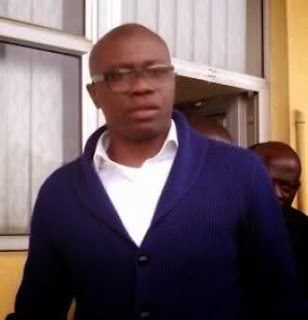 A Nigerian billionaire, Walter Wagbatsoma, has been convicted of fraud by a Lagos court.

Adaoha Ugo-Nnadi, convicted alongside Mr. Wagbatsoma for fuel subsidy fraud, fainted in the dock Friday as the judge began to read the sentence for her conviction forcing the proceedings to be rescheduled to Monday.

Mrs. Ugo-Nnadi, Mr. Wagbatsoma, and their company, Ontario Oil and Gas, were convicted on an eight-count amended charge of fuel subsidy fraud before the Ikeja Division of the Lagos High Court.

The minimum sentence for the crime is seven years while the maximum is 20 years.

Mr. Wagbatsoma, the first convict, is currently under house arrest in the United Kingdom where he is accused of money laundering.

“The case of the prosecution against the first, second, and fourth defendants has been proved beyond reasonable doubt and they are convicted on each of the eight counts,” the judge said.

As soon as Mrs. Okunnu returned after a 30-minute recess to read her sentencing, Mrs. Ugo-Nnadi, who was seated in the dock, collapsed in a heap leaving her relatives scrambling for water to resuscitate her.

The judge directed that a medical doctor be summoned and announced she would read her final judgment on Monday.

The convict, crying and retching on the floor inside the dock, was carried into her waiting Sports Utility Vehicle, and rushed to a hospital.

It was a dramatic end to a day that began with the suspects strolling around the courtroom in an ebullient mood before the judge’s arrival around 9.20 a.m. Mrs. Ugo-Nnadi, decked in an immaculate blue attire, slapped the arm of a friend telling her to “cheer up,” and a few moments later laughed at a seemingly hilarious joke shared by her lawyer.

The defendants were first arraigned by the Economic and Financial Crimes Commission, EFCC, in 2012 for fraud, forgery, and conspiracy amounting to N1.9 billion in the fuel subsidy scheme.

They were later re-arraigned in 2013 after the trial judge was elevated to the Court of Appeal, and then again in 2016 on an eight-count amended charge.

They had pleaded not guilty to all the charges.

The judge said the prosecution had accused Mr. Wagbatsoma, Mrs. Ugo-Nnadi, and Ontario Oil and Gas of collecting N942 billion as subsidy payment instead of N602 million.

Mr. Wagbatsoma is the chairman of the company while Mrs. Ugo-Nnadi is the managing director.

The judge also said the prosecution gave evidence that the convicts discharged “a much lesser quantity” of petrol in their transaction with the government and presented a forged shore tank certificate.

“The fourth defendant defrauded the federal government of N340 million,” she said.

A prosecution witness gave evidence that, in the first transaction, Ontario Oil paid N37 million for 12 million litres of fuel in a throughput agreement with Integrated oil and Gas, but later collected subsidy for 19 million litres.

In the second transaction, the company collected subsidy for 19 million litres while they paid a throughput agreement with Obat Oil worth N28 million for 10 million litres of fuel.

“Both the first and second defendants signed the cheque for the throughput agreement,” the judge quoted the witness as saying.

Another prosecution witness, Obinna Ukonu, a store officer at Integrated Oil and Gas, gave evidence that Ontario brought in 12 million litres of fuel via a mother vessel, MT Pacific, and then a daughter vessel, MT Union Brave. The same quantity was “trucked out” by the company.

“I find that there is credible, concrete evidence that the quantity of petrol discharged was 12 million litres,” said the judge.

“Evidence by the prosecution is that the product was discharged into one tank which cannot contain more than 16.5 million litres because of an inbuilt floating roof that takes about two million litres.”

An exhibit that the judge described as “very damaging” to the defendants’ case was Exhibit D1, a calibrated report which showed that the tank in question cannot contain more than 18 million litres of fuel.

In 2012, when the convicts were first arraigned, Mr. Wagbatsoma was absent.
Rotimi Jacobs, the EFCC counsel, told the then judge, Habeeb Abiru, that he had fled to the U.S. to avoid trial.

When he eventually returned to face trial, the judge imposed a N450 million bail on him.
In July last year, despite the court holding his international passport and other travel documents, Mr.

Wagbatsoma was arrested in Germany and extradited to the UK to face money laundering charges.

He is currently under house arrest in the UK.

On Friday, the judge said Mr. Wagbatsoma during his testimony tried to distance himself from the running of Ontario Oil and Gas.

“The first defendant while testifying laboured to convince the court that he was not involved in the day to day running of the fourth defendant, but he signs the cheques,” Mrs. Okunnu said.

“He is of sound, literate mind. Over and over again, he informed the court he sits on the board of 27 companies. He knew what he was doing when he signed those cheques, and there is evidence that he used the money from the subsidy payment.”

For Mrs. Ugo-Nnadi, the judge described her as the “operating mind and the alter ego” of the company.
“She had full knowledge of the entire exercise.”

The judge also said she had no doubt that the company forged shore tank certificate, used for the subsidy payment.

“I find the first, second, and fourth defendants guilty of forgery. All three of them conspired as there was a meeting of minds,” she said.

The case against Mr. Fakuade, who was discharged and acquitted, was that he signed and embossed the PPPRA stamp on a forged document, the judge said.

“There is nothing that shows that he was aware of the real document that showed the actual amount of fuel discharged. It was simply gross negligence on his part.”

Before she began reading the sentencing for the crimes, the defence lawyers said they would make a “plea allocotus” – to beg the judge to temper justice with mercy.

The lawyer said Mrs. Ugo-Nnadi had been having “very serious health challenges” but has managed to be attending all the trial proceedings.

“It is our humble plea that a custodial sentence will do serious damage to her health as a result of the crowding in the prison and three or four doctors to hundreds of inmates,” the lawyer said.

He said his client is a mother of “very young children” and a prison stay would deprive her children of her “mother and father” roles.

He also said the embarrassment and loss of businesses the second defendant had suffered is enough restitution for her crime.

“The second defendant throughout the trial has suffered psychologically. She has been the butt of publications online, written press, television. She has suffered so much.”
But Mr. Jacobs said anything short of sending the convict to prison would make a mockery of the fight against corruption.

“It will send a wrong signal that custodial sentence is the preserve of the poor and the rich cannot go to jail,” said Mr. Jacobs, a senior advocate of Nigeria.

“The purpose of our criminal law is to ensure that those who contravene the law do not escape the consequences of the law.”

Premiumtimes
Posted by MAN ABOUT TOWN at 10:14 AM