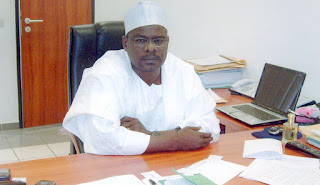 Borno Senator, Ali Ndume, who was removed as Senate Majority Leader on Tuesday, has revealed why he was ousted.

The president of the Senate, Bukola Saraki, announced Mr. Ndume’s removal shortly before the upper legislative chamber adjourned on Tuesday.

Mr. Saraki read a letter from the All Progressives Congress caucus asking for leadership change.
Mr. Ndume had stepped out of the chamber to observe his early afternoon prayer when Mr. Saraki read
the letter.

Mr. Lawan was until his new role the chairman of the Senate committee on defence, a position he assumed after losing the June 2015 senate presidency election to Mr. Saraki.

But speaking exclusively with PREMIUM TIMES hours after his removal on Tuesday, Mr. Ndume said he was removed for insisting that the Senate did not follow the proper procedure before declaring that it had rejected the nomination of Ibrahim Magu as head of the Economic and Financial Crimes Commission, EFCC.

Mr. Ndume said he insisted that in view of the Senate’s standard procedures and practice, Mr. Magu had not been rejected by the Senate because there was no confirmation hearing for the nominee to defend claims made against him.

“What I said was that for us (Senate) to claim to have a rejected a nominee sent to us by the president, we have to follow the right procedure, and observe our rules,” the senator said.

“The nominee should have been called into the chamber and presented before senators who will then openly vote on whether to accept or reject his or her nomination.

“In the case of Magu, that was not done. We only had a closed-door session and when we emerged the
Senate spokesperson claimed that he had been rejected. I had to set the record straight by saying we never rejected the nominee. This is because you don’t accept or reject a nominee at a closed session.
Öur votes and proceedings are there as evidence of my claims.”

Mr. Ndume said the clarification he made unsettled some of his colleagues, who immediately began to plot against him.

“Ï was surprised that such a simple and harmless clarification could rattle and anger some of my colleagues,” he said. I thought it wasn’t a big deal to disagree over issues. I didn’t realise that that simple matter would snowball into a plot to remove me.

“The other day, somebody mentioned to me that the Senate President had commissioned Dino Melaye to collect signatures to remove me. I didn’t pay much attention to the information because I actually thought it was a joke or a rumour.

“I didn’t feel that disagreeing with colleagues, and sharing my understanding of what transpired at our closed session was an offence, grievous enough to cause my removal.”

Messrs. Magu and Ndume hail from the same northeastern state of Borno.

Mr. Magu’s rejection followed a report sent to the Senate by the State Security Service which accused the acting EFCC chairman of corruption.

But there was also another report by the SSS which advised that Mr. Magu be confirmed in view of his sterling performance since he started working in acting capacity.

A senator familiar with the matter said Mr. Ndume especially angered Mr. Saraki when he asked why he guided members to act on the report advising against Mr. Magu’s confirmation, while ignoring the one which urged that he should be cleared for the office.

Mr. Ndume reportedly argued that what the Senate should have done was to call attention to the two security reports, and then ask the president whether to continue with the confirmation process or not.

He told PREMIUM TIMES that there was a caucus meeting on Monday during which the decision to remove Mr. Ndume was taken.

Asked when and where the meeting held, he said he was not present but that a letter said to have been generated there was brought to him to sign before plenary commenced on Tuesday.

Mr. Marafa, who said the APC caucus agreed to allow Bala Na’Allah continue as Deputy Leader, added that he was looking forward to Ike Ekweremadu, Deputy Senate President, who is a member of the Peoples Democratic Party, decamping to the ruling party.

“The more the merrier,” he said, adding, “Ekweremadu is my friend, brother, boss and leader and enjoy good working relationship with him.”

premiumtimes
Posted by MAN ABOUT TOWN at 3:15 PM