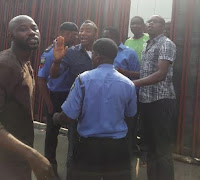 The Lagos state police command have arrested publisher of online news platform, Sahara Reporters, Omoyele Sowore, over allegations of defamation of character and threat to life.

He was arrested at his home in Lagos this afternoon. The command acted based on a petition received from UK based journalist, Lekan Fatodu.

According to the petitioner‎, Sowore had in a publication on his
platform, alleged that he was being used by some politicians to carry out acts of money laundering.