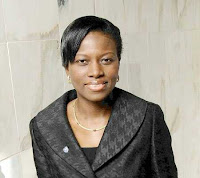 Stanbic IBTC informed the Nigerian Stock Exchange that David-Borha, who has led the company from 2012 till date, has resigned to
take up a new role with Standard Bank Group in South Africa.

“This is to advise The Nigerian Stock Exchange that Mrs. Sola David – Borha has resigned her appointment as Chief Executive of Stanbic IBTC Holdings PLC, in order to take up a new role as Chief Executive (Rest of Africa) at the Standard Bank Group in South Africa,” the company said.
“Mrs. David – Borha’s resignation became effective on Thursday 19 January 2017. Sequel to the above, we are pleased to announce the appointment of Mr. Yinka Sanni as the new Chief Executive of Stanbic IBTC Holdings PLC with effect from Thursday 19 January 2017.”
Sanni, who prior to his new appointment, was Chief Executive of Stanbic IBTC Bank PLC, (the Bank) is said to bring over 26 years experience in financial services covering banking, pension and asset management.
Sanni holds an MBA from the Obafemi Awolowo University Ile-Ife, having also undertaken the Harvard Business School, Boston’s Advanced Management Programme.
He is a graduate of the University of Nigeria, Nsukka; with Bachelors in Agricultural Economics.
Sanni is also a fellow of the Chartered Institute of Stockbrokers of Nigeria.
Demola Sogunle, the current deputy chief executive of the bank, has assumed the role of chief executive of the bank (effective 25 January 2017) following Sanni’s elevation.

Thecable
Posted by MAN ABOUT TOWN at 10:19 AM