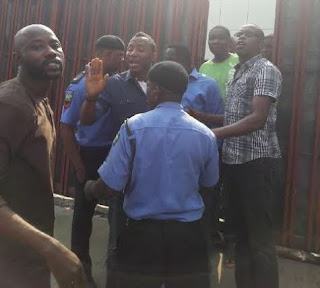 The disagreement between Omoyele Sowore, publisher of Sahara Reporters, and Lekan Fatodu, a UK-based journalist, is about to be resolved, following the intervention of some legal practitioners.

Both men were involved in a brawl in Ikeja, capital of Lagos state, on Wednesday.
The police had to intervene, and they were taken to the office of the commissioner of police in the state, from where the matter was transferred to the State Criminal Investigation Department (SCID).
The two of them were released from the station on Wednesday night, but told to report by 2pm on Thursday.


In separate interviews with TheCable, both men traded blames for the spat.
But at Panti on Thursday, Tunji Abayomi, human rights lawyer, appealed to the two parties to sheathe their swords.
He fixed a meeting at his chambers for Tuesday, expressing optimism that the issue would be resolved.
Shortly after the encounter at the station, Femi Falana, Lagos-based lawyer, said the police had “thrown out the case”.
“The complaint against Sowore was thrown out by the Lagos state police command this afternoon,” he said in a statement.
“The police said that the allegation of blackmail was not established against Mr. Omoyele Sowore. With respect to the complaint of defamation of character by Sahara Reporters publication the complainant was advised by the police to approach a civil court for legal redress.”
Sowore and Fatodu shared their experiences on Facebook, but none of them used abusive words like they did earlier.
“I was at the Nigeria Police State CID in Lagos prepared to face ‘charges’, the Commissioner of Police, Fatai Owoseni had promised he’d file today, they came up empty handed and I am now back on the beat!” Sowore wrote.
“I will give a detailed position of the other intrigues later.”
On his part, Fatodu said: “I thank everyone who was present at the Panti Police Station, and appreciation to Dr. Tunji Abayomi, the senior lawyer and respectable statesman who pleaded to the police and both parties involved in the current matter to accord him the honour of engagement with the parties concerned in his law chambers on Tuesday 17th January 2016.
“He also urged the two parties to cease cyber exchanges until after the Tuesday’s meeting,  a position he stated openly before the press and all present after today’s meeting.”
But Sowore said he reserved the right to pursue the criminal aspect of the case.
“I reserve the right to pursue the criminal aspect of the case,” he told TheCable