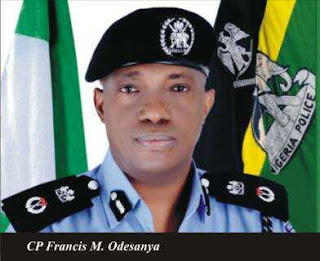 The Rivers State Police Commissioner, Mr. Francis Bolaji Odesanya, is dead. Odesanya was said to have died this morning in an
undisclosed hospital abroad after a brief illness.

He was the 37th Rivers State Commissioner of Police, having succeeded Mr. Foluso Adebanjo on July 12, 2016.

Odesanya joined the force on February 2, 1986, as a Cadet Assistant Superintendent of Police and rose through the ranks to his current position of Commissioner of Police

punch
Posted by MAN ABOUT TOWN at 7:29 AM